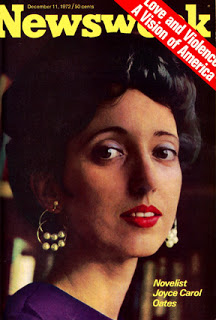 This is the third in a series of blog posts by NBCC board members covering the finalists for the NBCC awards. The awards will be announced on March 6, 2008, at the New School.

She has been a famous American starlet, a murderer and a senator. She has also been a lawyer, a religious zealot and a 16-year-old girl. In fact, with over 1,000 stories and more than 100 books to her name, Joyce Carol Oates must have created at least 10,000 characters by now—enough to fill a small town. Enter any bookstore and you can spy this place in the distance, twinkling darkly, her other America.

But the one person Oates has seldom been in public is herself—until now. Biographer Greg Johnson has compiled and edited a selection of her journals from 1973-1982, a period when she published 29 books, including some of her most experimental fiction (a prose-poem novel) and poetry of great intensity and rawness: “Women Whose Lives are Food, Men Whose Lives Are Money.” All this and she apparently had time to take country drives and garden, too.

Yes, that’s right, folks: The woman has a life. Here is the National Book Award-winning author of Them and scads of other novels receiving—and enjoying!—visits from her parents, lunching with friends, parties with her husband, the critic and professor Raymond Smith. When work is done they hit the road and take in the great sweep of Americana.

Readers curious for a glimpse of the literati will get an eyeful here. Oates lunches with novelist Gail Godwin (“very attractive”), meets, admires and befriends Susan Sontag (living beyond her means in an enormous rented apartment with no savings), runs into the novelist Stanley Elkin in London, tries (and fails) to strike up a conversation with Robert Pirsig and his wife. She even has that most modern of accoutrements: a stalker.

Oates also strikes up a warm and convivial friendship with John Updike, who appears as much as any other novelist in these pages. “He’s self-deprecating in a playful way,” she writes. “Perhaps, like me, Updike doesn’t dare acknowledge the central importance of writing to his life; perhaps the gift rather alarms him, as it does me, at times, and has the aura of something so sacred it either can’t be spoken of at all or must be alluded to in a slighting manner.”

And what of this gift? It’s fascinating to watch Oates move between the hyper-social world of parties and teaching to the life of her mind—which is the true subject of these journals. She begins them in 1973 as attempt to record what she calls “the refractory and inviolable authenticity of daily life: daily-ness, day-ness, day-lightness, the day’s eye of experience.”

If there is anything this book makes clear, it’s that Joyce Carol Oates is in control of her work. Ideas percolate and become stories before our eyes, are wrestled with, picked at over years. Novels grind to a halt and need to be rewritten. She is the opposite of attached—fixed, instead, to the work coming out. “Silence, exile, cunning,” she muses one day. “To which I must add my favorite: invisibility.”

But this is a dream figment, especially for a novelist who was on the cover of Newsweek in 1972 and has been a Nobel candidate for decades. Like so many writers before her, she plunges into lakes of self-doubt, is hurt by bad reviews, buoyed by the good ones, frustrated at the results of her “idiotic” labors and wonders at her standing.

These matters are the superficial frictions of making art. The deeper contact points are buried throughout this book, and it must have taken some courage to reveal them. As she says goodbye in 1982 to her parents after a visit, for instance, Oates is doubled over by loss. “I can’t, can’t, can’t organize these thoughts,” she writes. “I can’t express what I feel. I feel so much!” Thus her furious, amazing production continues.