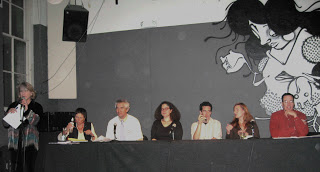 California-based literary agent Sandra Dijkstra, whose clients over the past 25 years have included Maxine Hong Kingston, Amy Tan, Lisa See, Anchee Min, Chitra Divakaruni, and Micheline Marcom, says she is always on the lookout for new writers; her staff reads literary magazines like Zoetrope, Zyzzyva, and the Iowa Review in search of fresh talent.

NEA literature honcho and former San Francisco Chronicle book columnist David Kipen pointed out that the program he heads seeks out and supports poets and prose writers with $25,000 grants. The latest grants just went to 42 prose writers, including Nona M Caspers of San Francisco, Thomas H.McNeely of Menlo Park,Micah E.Perks of Santa Cruz, Cornelia L.Read of Berkeley, and Ann J.Williams of San Francisco.When he asked for a show of hands of NEA grant winners in the audience, Kipen flushed out quite a few, including two-time NEA winner Barbara Alexandra Szerlip.

McSweeney’s Books came up with “One Hundred and Forty Five Stories in a Small Box” by Deb Olin Unferth,Sarah Manguso, and Dave Eggers, intended to be “in the grand tradition of Neapolitan ice cream, ZZ Top, and Cerberus, the tri-headed guardian of Hades,” and “Everything That Rises:A Book of Convergences” by Lawrence Weschler, which won last year’s NBCC award in criticism. It combines text and graphics, and was backed up by a website “convergences” contest. Publisher Eli Horowitz says sometimes books that have been rejected elsewhere offer fresh challenges for McSweeney’s, including graphic problems to solve. Forthcoming: John Brandon’s “Arkansas,” a murder mystery that begins in a state park in southern Arkansas.

Suzanne Kleid, co-editor of the McSweeney’s anthology “Created in Darkness by Troubled Americans: The Best of Mcsweeney’s Humor Category” (Knopf 2004) says she started out as a McS intern. She now blogs for KQED’s Arts and Culture blog, and is a floor supervisor at City Lights, working with Paul Yamazaki to select contemporary fiction. “Paul describes it as curating,” she said.

Michelle Richmond, who describes herself as coming from Alabama via Arkansas with no connections to any of the usual literary pathways (Iowa Writers’ Workshop, UC Irvine, Stanford, Columbia), was a “new voice” herself not long ago. She submitted a manuscript, “The Girl in the Fall-Away Dress,” to the AWP writing contest; winning that set her on her way. She blogs (Sans Serif) and also edits an online literary magazine (Fiction Attic). She, too, is on the lookout for new writers.

Greg Sarris is a fiction writer (his first story collection, “Grand Avenue,” about the Indian community in Santa Rosa, became an HBO miniseries, which he co-produced with Robert Redford), professor at Sonoma State, and chairman of the Federated Indians of Graton Rancheria. (Video here.)He described his vision of “restorying the landscape” of Northern California, and feeding a need to come back home. His tribal work includes a project for young writers to gather oral histories from elders, a “Word for Word” theater project in which stories are dramatized at dozens of schools throughout the Bay Area, as well as millions of dollars from the tribe to support scholarships at writing programs throughout Northern California.