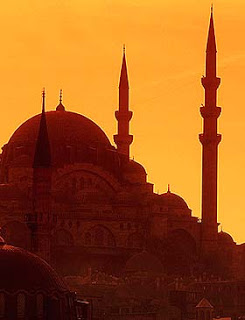 A FEW YEARS ago I interviewed a Turkish novelist who was very careful about making comments about the political situation back home. This was a very tense time in Turkey, a tragic time, really, but given that my article was going to be printed on Long Island, I don’t think I fully appreciated how quickly something said by or about a Turkish writer would travel back home.
But it does—and it still does. Last week in Istanbul I opened the Turkish Daily News, the country’s English Daily, to find that the lead, above the fold story was not a potential downturn in Turkey’s economy, as the BBC was reporting, but that someone had taken a swipe at Nobel Prize winner Orhan Pamuk. “Deconstructing Pamuk, a la Berlinski,” was the article’s headline, which proceeded to repeat and summarize much of an essay ex-pat American writer Claire Berlinski published in…wait for it…the Toronto Globe & Mail. It’s not worth summarizing here, but it’s basically an emperor has no clothes piece…
I suppose this kind of phenomenon will only continue as we all beginning reading each other’s newspapers. The Guardian has more readers outside Britain than inside it. Thanks to websites like the Complete Review, newspaper coverage of books from El-Ahram Weekly to the Moscow Times enters the swirl on occasion. I don’t think I’m being a Luddite when I say it means more to actually see these papers in print (because you can see just how much space is given to a piece).
What was most interesting about the Berlinksi piece to me was not her description of Pamuk’s fetishization of melancholy, but the fact that a hometown paper was elevating (in print) something written by an expatriate (living in Istanbul) and published abroad as if it were all happening right there. I’m not up enough on the insider baseball to sniff out any motives or hit piece digs here. And I don’t agree with Thomas Friedman when he says the world is flat, but in the way that arts criticism can travel these days it’s beginning to look more like there’s some truth to the claim.