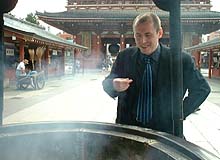 LAST month, the NBCC launched a Best Recommended List, drawn from the votes of our members and over a hundred former finalists and winners of our award. (For more on that go here). One of the voters was NBCC member Kel Munger. Here's what she had to say about the title she voted for.

In spite of Granta magazine's naming David Peace (above) one of the best of the young British writers in 2003, I'd never heard of him. That was my loss. A publicist suggested Tokyo, Year Zero while I was requesting another book, and frankly, I was far more impressed with Peace's latest novel than with the book I'd originally asked to review.

Although it is a murder mystery, Tokyo Year Zero is also a depiction of the destruction of culture and soul by war. And even though it's set in occupied Japan in the aftermath of World War II, as I read it, I couldn't help but imagine a policeman in Iraq, trying to do his job while his psyche and his country race each other to destruction.

Tokyo Year Zero uses the breakdown of law and order to address the breakdown of personal identity and morality. But more than a well-paced, fascinating depiction of a country and its citizens falling apart, Peace uses language like a poet. This novel is politically aware and still a plot-driven mystery; that sets a scene so precisely in place and time while evoking the contemporary world; and that pays such close attention to language even as it rushes at break-neck speed all around bombed-out Tokyo.