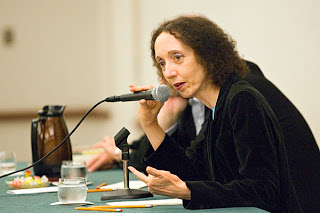 Michael Dirda is so familiar in his role as a Washington Post Book World columnist, you almost forget he can go deep into the next end zone, as he did recently in the New York Review of Books with a review of several books Joyce Carol Oates published in 2007. It’s a terrific piece, as it addresses most of the major criticisms of Oates, specifically her prolificness.

“In short, Joyce Carol Oates is a major one-woman industry. Her journal tells us that she writes from 8 till 1 every day, then again for two or three hours in the evening. And she revises and polishes and reworks page after page after page. Such commitment, coupled with her literary fecundity, unnerves many people. Surely so many books can’t be that good, that deeply felt, truly authentic?

If you don’t know the answer to those questions already, read The Gravedigger’s Daughter, her novel of last May about immigrants from Nazi Germany who settle in upstate New York. Though one may argue about aspects of the book, there can be no question of its power and conviction. The same can be said about most of Oates’s major novels. Look at her paperbacks and nearly every other one is acclaimed as her best work yet. Constantly exploring new aspects of American life, Joyce Carol Oates has restlessly evolved as an artist.”

Dirda goes on to look at how many different sides of Oates are apparent in three genres she’s published in this year—the novel, her journals, and tales of suspense.

“In the stories collected in The Museum of Dr. Moses, that power descends to the grotesque and even to Grand Guignol. Yet these “tales of mystery and suspense” also render horror in distinctly familial, even homey ways. One reads of parboiled babies wrapped in aluminum foil; twins who murder, or don’t murder, each other; a widow whose doctor-husband experiments on her skin; a young boy who turns into a wild animal; a psychopath who butchers the lonely women he attracts; and a husband who prepares a grisly surprise for the wife who is leaving him. The surreal lyricism of many of the stories only adds to their disturbing neighborliness.”

Anyway, do check it out, as the essay is a nice introduction to some of Oates’ themes if you’re new to her work and feeling daunted about where to begin.