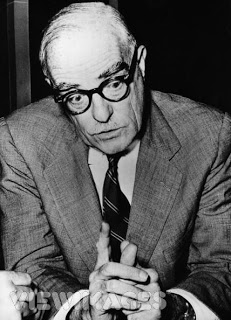 How many very good contemporary novelists have become hard to write about because of the back-drafts caused by their success? I could name names here, but you know the kind of writer. It was a dilemma back in the 1920s as well, as Edmund Wilson noted in his passage about Thornton Wilder (pictured left):

“Now that Mr. Thornton Wilder has become both a bestseller and a Pulitzer Prize-winner, he is in an unfortunate situation. On the one hand, the literary columnists have accepted him as a Reputation and a gossip about him with respect but without intelligence; and, on the other, the literary snobs have been driven by this tremendous popularity, by the obsequious gossips themselves, into talking as if they took it for granted that there must be something meretricious about him. Mr. Wilder remains, however, a remarkably interesting writer, with a good deal to be said about him which no one, so far as I know, has said.”