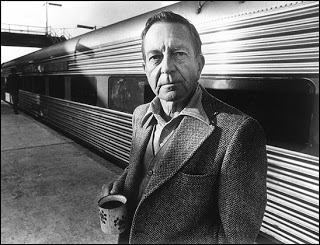 If you want to see a novelist run screaming, just say you know exactly what that writer had in mind when composing the book you just read.

Me? You think this novel is about me?

Don't be ridiculous. I made it all up.

When it comes to personal matters, denial is the rule. Even authors of autobiographical first novels stoutly claim that what you just read may be drawn from life, but it bears no resemblance to persons living or dead…

At the same time, fiction we read and write has to come from somewhere. It's life, but life transformed. No matter how far-fetched the subject matter, every novel is to some extent about where the novelist is coming from, who that person is.

This is particularly true of John Cheever's 1977 novel, Falconer. At the time, it was hailed as a breakthrough book that addressed Cheever's bisexuality as frankly as a writer could in those buttoned-up times. Although what Victorians called “the love that dare not speak its name” had taken its first step out of the closet, the door was by no means open wide enough to let the sun shine on gay and straight men alike.

The praise for Falconer was almost unanimous, but a regretful John Leonard wrote, “It is sad, though, that one of the few novelists who knows how to write about the dialectic between men and women (and their children) with a gentle seriousness, a palpable joy, should have made himself a stranger.”

I remember being not shocked, but regretful in some of the same ways– and tremendously uneasy– when I read it at the time. Cheever, the brilliant and urbane chronicler of WASP foibles and an often funny writer, transformed the way writers do when they write from inside a character. He became Farragut, a prisoner at Falconer. In a state pen not unlike the one at Ossening, where Cheever taught, he fell in love with another prisoner, resolutely insisting that they were not gay.

Rereading in a more hospitable climate exactly 30 years later, I think I know why I was so disturbed.

Before I began this piece I did a spot poll of gay family and friends. I asked them, are there truly bisexual men out there, or are they just gay men who can't quite make it out of the closet? Bisexuality's real, they assure me, and among gay people I know and care about, the verdict is unanimous.

Which seems to be why I was and remain so uncomfortable with this book. When a stylist known for writing about manners takes on the world of matters, the material isn't always a good match. Stylistically, Falconer is uneven, but that isn't it.

The author insists so firmly and so often that unhappily married Farragut, a prisoner in involuntary de-tox, is not gay that I have to wonder. Not only is Farragut not gay, Cheever tells us, his lover Jody is aggressively straight.

Like the Monty Pythons singing “I'm a lumberjack and I'm OK,” everybody in Falconer protests too much.

“'I'm so glad you ain't homosexual,' Jody kept saying when he caressed Farragut's hair… From what Farragut had read in the newspapers about prison life he had expected this to happen, but what he had not expected was that this grotesque bonding of their relationship would provoke in him so profound a love.”

Later, Farragut wonders, “Why did he long so for Jody when he had often thought that it was his role in life to possess the most beautiful women?” He goes on in detail and at length about his heterosexual love life and how very, very straight he is, but then:

“His radiant and aching need for Jody spread out from his crotch through every part of him, visible and invisible, and he wondered if he could bring off his love for Jody in the street… and if he refrained from any of this wouldn't he be conforming to the cruel edicts of a blasphemous society?”

In his excellent biography, Scott Donaldson details the society Cheever came up in. The buttoned-up 1930s and '40s, the gray-flannel-suited 1950s formed him according to social expectations. In a way, his long affiliation with the Ross/Shawn New Yorker reaffirmed this. Proper WASPS simply didn't do that which was not done. Donaldson also details Cheever's long, unhappy marriage and his affairs which, in the later years, were mostly with men.

As novelist, I hate what I'm doing here, but as empathic reader, I can't stop myself. I think Cheever was a product of his age, and that he got married in an era when society pressured many gay men into marrying.

I can't prove it, but I think that in Falconer the chronicler of light and grace and embarrassing moments is presenting an argument between the way he is and the way things are in the world he navigated so painfully and at such tremendous cost.

Novelist Kit Reed reviews for the Hartford Courant, the St. Petersburg Times and the Chicago Sun-Times. Her most recent books are a novel, The Baby Merchant, and Dogs of Truth, a short story collection.