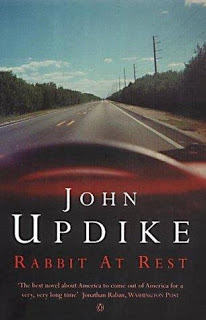 AS FICTION GOES, this is the commercial strip right outside of town. Mainstream as a chainstore, by now (1981, when Rabbit is Rich hits the bestseller list) Rabbit is a brand, too uncool for the young and adventurous, but just right for the middle-aged set who've been tuning in since the Kennedy administration.

A sequel of a sequel can't surprise, and anyway, these are paeans to the mundane. The setting of Brewer, PA, is bland and unremarkable, Anytown, USA, as is Rabbit's profession, car dealer. The gush of language is familiar, almost Nabokovian, as is the author's penchant for metaphor, his art-trained eye lovingly coveting the physical world, his cultural judgments double-edged, sometimes honest, sometimes ironic. What sets Updike's vision of smalltown America apart from the master's–still–is his choice of hero.

Harry Angstrom, as his last name insists, is a little guy in a big world, his cares petty, venial, but unlike Pnin, he's not a retiring innocent, misunderstood and mistreated, merely at the mercy of larger currents. True to his nickname, Rabbit is elusive and unfaithful, always on the make, governed as he is by his animal nature. Following his appetites, he trespasses against those closest to him over and over. Like Charlie Chaplin's Little Tramp, he's a sneak, and a randy one, thinking he can get away with anything as long as folks' backs are turned. When things go wrong, he flees.

Back in 1960 Rabbit might have been seen as a bad boy anti-hero trying to escape the constrictions of whitebread smalltown life. By Rabbit is Rich he has no such excuse, and yet at heart he hasn't changed. Basically he's an asshole, a selfish jerk worried about money and comfort (perfect for the gimme-gimme Reagan '80s). His views of others are reductive and ugly, his take on women crude and sexist. He's deservedly and obliviously friendless. Of all the characters he's easily the most reprehensible, yet of Updike's many novels, only the Rabbit books can stand with the best of his short fiction.

Rather than polishing a spotless Everyman with a single crippling weakness, the author has made Rabbit all flaws and let him loose in middle-class America. We can't even try to identify with this bad boy (many women readers have famously given up in disgust), but most of us will watch just to see what kind of trouble he gets into next. He's not a rebel exactly (he's never so bold), but a fuck-up who–like Peter Rabbit–continually needs to relearn the basic lessons, paying for his sins with shame and humiliation.

Is Rabbit a decent man? Does he understand, in the end, that he needs to do better as a husband and father and would-be friend, as well as a citizen of a larger world? That these decisions are left to the reader, after thousands of cram-jammed pages, is proof that Updike's heavy third-person has done its work with a light touch. We've learned the lessons, even if Rabbit hasn't. Updike extends us this privilege: ultimately we get to feel superior to Harry, while at the same time acknowledging that he's nowhere close to the worst person on Earth, that maybe, in fact, there are millions of him out there. The reader's recognition of universal humanity is the writer's finest achievement. That Updike has done it with the homely materials of Harry's everyday life is a wonder.

Stewart O'Nan is the author of ten novels, including Snow Angels and A Prayer for the Dying, as well as works of nonfiction, including thebestselling book with Stephen King on the Boston Red Sox, Faithful. Granta has named him one of the twenty Best Young American Novelists. O'Nan lives with his family in Avon, Connecticut. His latest work, Last Night at the Lobster, is published this week.