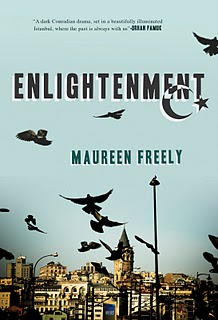 This excerpt is from “Enlightenment,” the novel by Maureen Freely, who is Orhan Pamuk's translator; it is coming out in May 2008, from Overlook Press.

I met Jeannie Wakefield for the first time late last summer. Though it would be more accurate to say that it was arranged that we should meet. I was back in Istanbul for one of my flying visits to keep my mother company while my father was in the hospital having a hip replaced. So let me set the scene for you: it was early evening and we were on the balcony having drinks. My mother was bringing me up to date on the latest gossip about people I knew only by name, and as she spoke I gazed out at the branches I felt I knew leaf by leaf, though the trees themselves were twice as tall as they'd been when I was a child. There was something about the light–or something behind it. The sun had already set behind the hills on our side of the Bosphorus, but filtering through the blue-green foliage of my mother's garden I could almost see the reflected gold from the hills of Asia.

No hint of the sea between us–just the low hum of a passing tanker, the putter of a fishing boat, a car backfiring on the road leading down to the shore. Below us, in the Burc Club, a man was testing a microphone. Filing down the white walk were the first guests for what my mother told me was the third alumni wedding to be held at the club since Wednesday. As a woman in a filmy dress picked her way past a family of lazily growling dogs, she faltered on her stilettos but was righted by the man next to her. He glanced sternly into our garden, whereupon, following his gaze, I, too, saw the most curious scene: a thin and anxious woman in a belly dancing outfit, posing on what I assumed to be a log. Crouched next to the wall was a photographer casting furtive looks in our direction.

“Do you know this man?” I asked my mother. “Does he have permission to be here?”

She shrugged her shoulders. “It’s not for me to say.”