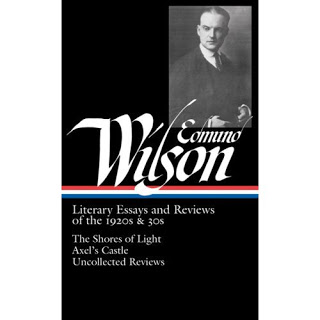 REGULAR READERS of our blog have probably noticed that the name Edmund Wilson has come up several times in the previous installments of the Critical Library series — in which critics recommend five books reviewers have in their permanent libraries.

Rather than go into a long explanation of why Wilson is so important to critics today, it feels more appropriate to simply quote from his reviews. It's not hard to find winning passages. Like all our best critics today, Wilson was a supremely energetic writer, his prose powered by equal parts metaphor, bluster and incredible erudition.

So without further ado, here is Wilson writing of Ezra Pound in 1927:

“His early poems were full of gallant and simply felt emotions; but they were already tainted with an obsession which has cursed him all his life: the frantic desire to flee as far from Idaho as possible, the itching to prove to Main Street that he has extirpated it from his soul. That he has remained sucessful to this day is sufficiently attested by the fact that he still spends so much time insulting the United States. He seeks refuge in bawdiness, in obscurity, in recondite erudition, in the most extravagant of the modern movements, such as dadaism and vorticism, but he can never slough off his self-consciousness at having settled in the Sacred Grove. “Look at me!” he says in effect to his compatriots at home. “See how cultured and cosmopolitan I have become since I've left America — how different from you over there! I'll bet there's not a man among you who knows about Pratinas and Gaudier-Brzeska. I can read half a dozen languages! I am a friend of Francis Picabia!” But his sophistication is still juvenile, his ironies are still clumsy and obvious; when he ridicules Americans in Europe not very much simpler than himself, he reveals the callowness of the hunter by the pettiness of the game he pursues.”