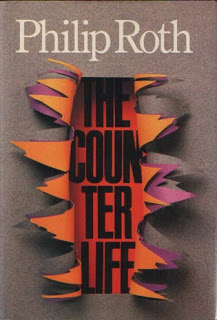 The following essay from n + 1editor Marco Roth continues the NBCC's In Retrospect Series — concluding our focus on Philip Roth's 1987 winner, “The Counterlife.”

AT THE END OF THE COUNTERLIFE, novelist Nathan Zuckerman imagines a “dear John” letter his pregnant, much younger British wife has left him. After only a few months of marriage, carrying Zuckerman’s child, she’s gone back to her first husband, a cold and proper product of the playing fields of Eton. It begins with the announcement that she’s “leaving the book.” This is the sort of metafictional gesture guaranteed to grate on the impatient sensibilities of plot-driven newspaper critics, like the Times’ Christopher Lehman Haupt. His “first run” review remains a testament to how newspaper writing can destroy a critic’s artistic judgment. Maria’s letter is no mere “all that is solid melts into air” postmodernism. The next sentence pulls us up: “I know characters rebelling against their author has been done before, but as my choice of a first husband should have made clear—at least to me—I have no desire to be original and never did.” We’re still in the realm of metafiction, but there’s also a great effort to keep the line remarkably in character. Here is willfulness, masquerading as extreme modesty, originality, or, at least, drastic action appearing as a retreat into the conventional and passive. Both poses are typical of the upper class British family Zuckerman’s Maria hails from. “The book” Maria tries to leave is not just The Counterlife, but, in Zuckerman’s imagination, her idea of what life with a writer is like—always living in a potential book in which you are a character, a plaything of someone else’s desires. As readers, we can take this last act in the densely imbricated series of fictions that composes The Counterlife as both an entirely plausible glimpse into why one might choose to leave a novelist at the height of his powers, and the sort of gesture that refuses to allow us to lose ourselves in the illusion of real lives we turn to novels to provide.

For Philip Roth—rather than his avatar Zuckerman—the sentence also erects a perfect defense of his foray into what was an increasingly conventional genre by 1986, when the novel was published. Yes, he’s saying, this has all been done before, by Pirandello, Beckett, Robbe-Grillet, Kundera, John Barth, and Calvino. But, as he nods to know-it-all critics and practioners in the tradition of experimental writing he’s also, like Maria, being originally conventional, or conventionally original, reclaiming the “novel about novels” and putting it to work on Roth’s native ground—not just the familiar haunts of Newark, Israel, and London, but his favorite territory of insatiable, inextinguishable human desire.

Academic theorists since Viktor Shklovsky have one of those seductive-sounding theory terms for fictional moments like Maria’s letter. “Laying bare the device,” they call it. The sexiness of the term actually seems appropriate in this case. Laying bare is what Philip Roth has always done, but it’s a mistake to think of desire as only about sex. In the case of The Counterlife, Roth lays bare the desire to make fictions or “counterlives” from the tissue of fantasies and might-have-beens woven out of the choices we didn’t make, the possibilities we refused to take. “Counterlife” is itself a Roth neologism. The word suggests opposition rather than a series of equally pleasurable “alternate” or cheery “double” lives, the dark side of the desire to have it all. There are lives we imagine for ourselves that are set against the actual lives we are responsible for, undermining their stability, their narrative coherence. It’s a rich and ambiguous word that also evokes the ways multiple plots in a single novel or drama reflect upon and criticize each other, in the sense, for instance, that Shakespeare’s staging the story of Shylock’s humiliation in the middle of a conventional romantic comedy thoroughly disturbs every notion we have about comedies, tragedies, and “poetic justice.”

Sex is part of it, of course. The most obvious and domestic instance of this kind of thing is adultery, and this is how The Counterlife begins, with Zuckerman reflecting on his brother Henry’s affairs and how, for the sake of his last mistress, he underwent an unnecessary bypass operation that killed him. The operation would have got Henry off the heart disease drugs that were making him impotent. The medical details so necessary to the plot are one of the only things that make the novel seem dated now. The days before the balloon angioplasty! How did men live past fifty? They didn’t, it seems, or only partially. Impotence in Roth is always a spur to action.

Then, after the end of what is a perfect novella about the struggles of a family man, the poignancy and the hypocrisy, there comes part two, in which Henry survives his operation but still leaves his family to become a militant Orthodox Jew in one of the West Bank settlements. Nathan’s circumstances have also changed. He’s living in London with his new wife, “Maria,” the same name as Henry’s first Swiss mistress, although another character. If the first part is a small domestic tragedy, the second part is Middle Eastern politics as farce, and still far too relevant. We meet one of the great ranters in an oeuvre full of ranters, the settlement leader, Mordecai Lippmann:

Eloquent, Lippmann is, all the same, haunted by powerlessness. Without saying it overtly, Roth suggests that the settlement dream arises from another kind of impotence. There’s the longing for authentic “biblical” Jewish life. The combined kingdom of Judea and Samaria will at last salve the persecution fears and paranoia that comes from being a minority in the diaspora, and worse, the object of someone’s fantasy about you. At this point, the novel turns again to expose the dream of perfect integration as no less a fantasy than the perfect separation to which it is opposed. In a kind of first draft of Operation Shylock, Roth introduces one of those epigones who claims Zuckerman as a father figure and tries to enlist his help, first with starting an Israeli baseball league, then in hijacking a plane to promote his program to end the Jewish obsession with the Holocaust, “Forget Remembering.”

TWENTY-ONE YEARS after the novel’s publication, it’s probably not necessary to complete a baroque catalog of its plots and counterplots evaporating finally into the final exchange of letters between Zuckerman and the woman who is really all his women, an exchange that takes place in the mind of a character in a posthumous manuscript—it turns out. Our jaded, post-modern sensibilities no longer respond to the thrill of sorting and pondering what’s “real” and what “fiction,” at least they shouldn’t. The Counterlife is best approached now less as a game of hide and seek between Roth and readers in search of “the facts” or the unified plot, than as an intensely willed literary object—one that gives enormous pleasure to those relaxed enough to be carried along by a chain of associations.

Take the infamous “mephitic odor” of Jewishness that causes the argument in the restaurant that leads to Maria’s letter. Forget whether a member of the British upper classes in the 1980s would really still have this medieval prejudice, as Julian Barnes notes in his interview. The smell pervades the novel, traveling from Lippmann’s speeches to a scene in a central chapter called “Aloft,” a macabre sequence that features a literary, wise-cracking anti-terrorist agent who fantasizes about torturing T.S. Eliot with a cigar in revenge for Eliot’s early anti-semitic poem “Burbank with Baedeker, Bleiststein with Cigar.” The cigar is the stink, again. The woman in the restaurant is T.S. Eliot, or rather everything Eliot stood for when it came to the Jews. The agent also keeps a mohel’s knife he uses to terrorize the terrorists in “a black velvet case.” The same black velvet case appears in the novel’s last chapter, “Christendom,” only this time it has the jewels Zuckerman offers to Maria right before the fight in the restaurant.

Zuckerman imagines Maria has left him because he’s “raised a stink,” which is what Jews do, or rather, what Philip Roth does. The phrase “raising a stink” is never used in the novel, but you can’t read it without it entering your mind. “Raising a stink” isn’t exactly what people object to about Jews anymore, but it is what they object to about good novels and novelists. They disturb us. At this point, the method of The Counterlife becomes clear, as does the mysterious singular use of the title word when so many counterlives have been paraded before us. “Tranquility is disquieting to you, Nathan,” Maria writes to him, “The last thing you want is to make readers happy, with everything cozy and strifeless, and desire simply fulfilled. The pastoral is not your genre.” Zuckerman admits it, although he also acknowledges the pastoral impulse with a lovely phrase, “we all create imagined worlds, often green and breastlike, where we may finally be ‘ourselves’.” That there can be no pastoral does not prevent us from wanting one, as readers, as human beings, not just as Jews, or Christians, or members of particular sects and tribes. That’s why Roth took the trouble to create, as fully as his art allowed, not just one, but four possible pastoral lives for his characters, and also why—as he had to do to be the anatomist of desire rather than a cheerleader for desire, the novelist we need him to be rather than one we want him to be— he destroys them entirely.

Marco Roth (not related to the novelist, he knows, he knows) is one of the founding editors of n+1.