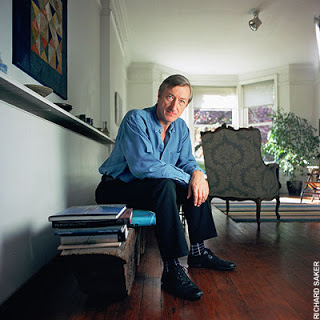 Several years ago I talked to Julian Barnes upon the publication of hisBooker Prize shortlisted novel, “Arthur & George.” During the interview we began discussing Philip Roth's books, and Barnes mentioned “The Counterlife” was his favorite among them.

With this week's In Retrospect seriesfocusing on “The Counterlife” — winner of the NBCC award for fiction in 1987 — I thought it'd be good to go back to Barnes and ask him a few more questions about the novel. Here is what he had to say.

Q: Why do you admire “The Counterlife?” Is Roth doing something different in this book than he does in his other fiction?

In 'The Counterlife' he raised the stakes for himself as a novelist. He took on bigger material – Nathan Zuckerman no longer provokes and betrays just the Jews of New Jersey, Nathan Zuckerman provokes and betrays the entire state of Israel! – and he was much more formally audacious than he had been before. I still think it's his finest novel – though that's a tough call.

Q: A significant part of this book takes place in London. Do you think Roth gets it right on the page?

One of the things about 'The Counterlife' is that it's an incredibly well-defended artefact: it reminds me of some fortified hill-village. So it seems to disarm criticism in advance. Of its portrayal of England, you could say: did London liberals really support Arafat? Is an English countryside depicted in terms of picture-postcard views and carol services authentic? Do upper-class women think that Jews smell, and if they did, would they say so (not once, but twice in the novel)? The novel's answer is: this is not a travelogue, these are Nathan's perceptions of England. Though this perhaps raises a subsequent question: if Nathan is unreliably subjective about England, is he equally so about Israel, where readers (this reader, anyway) are inclined to assume he is correct?

Q: Does this book speak to you about your own work? I feel of all your books, “A History of the World in 10 1/2 Chapters” is most similar to it. Did “The Counterlife” influence the writing of that book, or any other of your works?

I was certainly well advanced in thinking about my 'History' when 'The Counterlife' came out, and had already started writing it. So: no. It seems to me that I can and do admire Roth the more easily because I don't think he has the slightest influence on me. But then, I would say that, wouldn't I?

Q: How do you think “The Counterlife” will rest in Roth’s oeuvre at the end of the day? Is it a turning point? An experiment in new storytelling?

Well, for a start, let's hope Roth's oeuvre is far from complete. And that the posterity which judges him will not be along for some time. But if posterity has any nous, they'll rate this one as high as, oh, his next novel but three after 'Exit Ghost'.