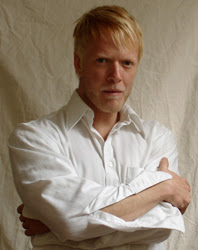 It's hard to judge how many writers have been displaced, dislocated and disoriented by Katrina and aftermath. This is part of a series I started a year ago with a conversation with Joshua Clark, who remained in New Orleans through Katrina, Rita and aftermath. Clark, the publisher of a small press, Light of New Orleans, has been raising funds to help New Orleans writers through K.A.R.E.S. When we spoke last summer, he was working on a memoir, which came out last month. Among the first reactions, this from New Orleans Times-Picayune book editor Susan Larson, in her review: “There are many different ways to read this book: as a passionate plea for the future of the city; as a demented celebration of that crazy New Orleans spirit dancing on the edge of apocalypse, as we always are here; as a poetic elegy for a beloved, adopted home; as a wildly impressionistic eyewitness account of the chaos that enveloped the city after the storm; as an (at times) wildly self-indulgent memoir of a love affair with a woman and a place. Ten years ago, Joshua Clark came to New Orleans, as many young writers do, looking for a muse, looking to tell a story, or to be part of one. With 'Heart Like Water,' he steps into literary history, a true New Orleans character now.” I spoke with Clark again on the eve of the second anniversary of Katrina.

Q. How did you decide upon the title of your memoir, “Heart Like Water”?
A. I went down to the Convention Center about two weeks after everyone had been evacuated. This was right before Hurricane Rita tore by us. There were reportedly only 500 residents left in the entire city. This was the eerie time, the vacuum, that takes up much of “Heart Like Water,” that little of the world knows about. I'm not sure anyone can really truly imagine living in their own town, a modern American city, suddenly emptied of all its people, electricity, everything… It's beyond science fiction. But it happened here. I remember, being there at the Convention Center, there was not a single person in sight. There never was in those days. I put my face up to the glass. Inside, it was as though Judgment Day had come and gone, everyone vanished. And no one had touched a thing since. There was an ungodly amount of food, sodas, water, cigarettes, shoes, bedding, these last posessions they had after losing everything else, all of it covered in flies, millions of them flitting about lazily. Two torn pages were pressed up against the window with a pillow. They were from the Bible, The Book of Lamentations.

How lonely sits the city
that was once full of people!
How like a widow has she become,
she who was great among the nations!
She who was a princess among the provinces
has become a slave.

She weeps bitterly in the night,
with tears on her cheeks;
among all her lovers
she has none to comfort her;
all her friends have dealt treacherously with her;
they have become her enemies.

Give yourself no rest,
your eyes no respite!
Arise, cry out in the night,
pour out your heart like water…

Q. Two years post Katrina, where do things stand now regarding federal aid and support?
A. You have no idea how much it hurts to hear officials say things like “They should just sell the French Quarter to Disney and move the port upriver” about your home. I used to say fuck them, I'm glad they don't know how good life can be here and thatit is the best city in America, then I ignored them for a long time, now it just hurts. It hurts that Bush doesn't mention us once in his state of the union. It hurts that he's threatening to veto the WRDA bill, which would give us a scant $2 billion already cut from the needed $14 billion) to help repair our eroding wetlands. Wetlands erosion, of course, is the reason Katrina did so much damage to Louisiana. Unlike Mississippi, 95 percent of our damage was manmade, because in 75 years we've undone 2500 years of land making by the Mississippi River. We've undone it so that the US can take one quarter of all its domestic oil and gas from here, seafood, one fifth of all imports and exports (we're still the largest port in the world),immense federal tax revenues, while we see diddly, except for the Gulf approaching our backyards. As I explain in the afterword to “Heart Like Water,” Louisiana is now the fastest disappearing land mass on the face of the Earth. The choice is between spending a relatively small sum now to fix the coast, or having the country cough up another $150+ billion (and counting) after the next hurricane. The shame is that the science and engineering to fix the coast is here, now. But the policy is not.

Q. Now that you have completed your memoir, what's your next project?
A. I edited a fitness book we're trying to sell to another publisher right now, in addition to keeping the KARES writers relief fund going and too many other things. After promotion for “Heart Like Water” tapers off, I am going to get back to some projects I was working on pre-K, mainly a book about Mississippi writers. And too, they'll be more from me, maybe some fiction — framed with Katrina as everything must be now — but I don't want to spill any beans right now.

Q. What do you say to people who used to live there, people who have visited, when they ask, Should we come back to New Orleans?
A. That’s an individual decision, one that's broken many hearts, for the people who either can’t return because they have nothing to come back to, or those who had to move because of work, their families, anything. If you can come back, I would beg you to do so. New Orleans needs you, now more than ever. All those faults, all those things going wrong here, are only going to get worse the more people leave, the less people who return. Let’s face it, we all live here now not BECAUSE of the city’s virtues, but DESPITE its faults. That is love. And if you love it, and you are able to, then heck yes come back to us and help the city. New Orleans has arguably seen more suffering than any other American city. Through three centuries of floods and fires and plagues and ten wars, New Orleans has always rebuilt. It has never been a place for the faint of heart. Will we ever be the same? Of course not. Did we lose something dear, irreplaceable, a piece of our heart in those vanished neighborhoods? Yes, of course. Will we go on? Yes. Will we rise from the ashes as an economic superpower? No. We haven't been that since the Civil War. But is that all that matters? Will we be the greatest American city culturally? Will the world continue to celebrate our music, literature, food, joy at life? Yes, always. Would I personally ever want to live anywhere else? Would I ever want to know what it means to miss New Orleans? Why on earth would I? I spend two days in another city and I start feeling sorry for the people who live there, because they don’t know what life can be like, what it can be like if you live in NO.