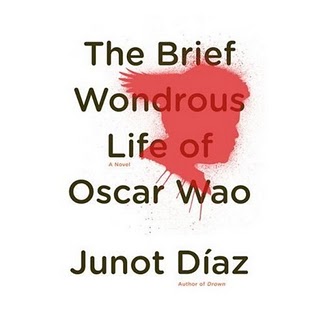 1. The Brief Wondrous Life of Oscar Wao, by Junot Díaz

In 1996 a young Dominican-American writer named Junot Díaz published a slender book of short stories called Drown. It was tender and tough and heartbreaking and all that stuff a first book of short stories is supposed to be. Then Díaz more or less disappeared for 11 years. Now he’s back with a book so astoundingly great that in a fall crowded with heavyweights — Richard Russo, Philip Roth, Nick Hornby, Tom Perotta — Díaz is a good bet to run away with the field. You could call The Brief Wondrous Life of Oscar an immigrant family saga, but that wouldn't really be fair. It's an immigrant family saga for people who don't read immigrant family sagas. The family in question, the de Leons, emigrated from the Dominican Republic. They are a mother, a son and a daughter, the father having amscrayed some years earlier. Son first: “Oscar was a social introvert who trembled with fear during gym class and who watched nerd British shows like Doctor Who and Blake's 7, could tell you the difference between a Veritech fighter and a Zentraedi walker, and he used a lot of huge-sounding nerd words like indefatigable and ubiquitous when talking to niggers who would barely graduate from high school.” Oscar is fat and shy and — amazingly enough — doesn't have a lot of luck with the ladies. Oscar’s sister Lola is slender and sexy and headstrong but in her own way almost as lost as Oscar. Their mother Beli is a domineering nightmare who brought along her own crushing load of psychic luggage when she fledthe Dominican dictator Rafael Trujillo, a paranoid serial rapist whose lengthy, stifling reign has cursed generations of Oscar's family. “He was our Sauron, our Arawn, our Darkseid, our Once and Future Dictator,” Díaz writes, “a personaje so outlandish, so perverse, so dreadful that not even a sci-fi writer could have made his ass up.”As Oscar and Lola grow up and go to college, they find themselves fighting a three-front war against the lingering dooms of the old country, the alien demands of New Jersey and the depredations of their romantic hearts, all at the same time. It’s not a winnable endgame, and the outcome is no fantasy. (“You know exactly what kind of world we live in,” Díaz writes. “It ain't no fucking Middle-earth.”) Díaz has written Oscar Wao (a mishearing of “Oscar Wilde” embedded in a Hemingway reference) in a mongrel argot of his devising, a mixture of straight-up English, Dominican Spanish and hieratic nerdspeak crowded with references to Tolkien, DC Comics, role-playing games and classic science fiction. (“What more sci-fi than the Santo Domingo?” Oscar asks, “What more fantasy than the Antilles?”) In lesser hands Oscar Wao would merely have been the saddest book of the year. With Díaz on the mike, it's also the funniest.

2. THE ALMOST MOON, by Alice Sebold

It took Alice Sebold all of two sentences to kill off the heroine of her first novel, The Lovely Bones. That book began as follows: “My name was Salmon, like the fish; first name, Susie. I was fourteen when I was murdered on December 6, 1973.” In her second novel, The Almost Moon, Sebold draws blood in half the time. The first line reads, in its entirety: “When all is said and done, killing my mother came easily.”Sebold is fascinated by physical cruelty. She knows about it firsthand: her first book, Lucky, was a memoir about her assault and rape by a stranger during her freshman year of college. But unlike Lucky and The Lovely Bones, The Almost Moon is not the story of a young victim, it’s of a full grown-up perpetrator. Middle-aged Helen Knightly is caring for her elderly, demented mother, with whom she has always had an angry, fraught relationship. One day Helen snaps and smothers her. It's like a mystery in reverse: you know exactly who got done, by whom and how. “I wish I could say that as my mother lay on the side porch,” Helen tells us, “and the wind began to pick up more and more so that the crows clinging to the tops of the trees took flight, that she made it easy on me. That she pointedly listed all the sins she had committed during her long life.”Nobody makes things easy on Helen, not her mother, her children or her ex-spouse. Certainly Sebold doesn't. The Almost Moon spins out over just 24 hours, each of them taut as piano wire, though Sebold also ranges over the full course of Helen's memories to show what brought her to this unthinkable act. Sebold's unblinking authorial gaze is her hallmark: where lesser writers would turn away from things too horrible to see or feel or admit, her gaze never falters.

3. SCHULZ AND PEANUTS, by David Michaelis

The earliest drawing anybody can remember Charles Schulz making depicts a man shoveling snow in a howling blizzard. A tropical green palm tree grows out of a nearby snowdrift. Not a bad gag for a kindergartner. But it's more than a gag; it's a self-portrait of a paradoxical person. Schulz was a sad man who made jokes for a living; a kind, Midwestern man who held life-long grudges; a loving man with a troubled marriage; a man who drew a comic strip for 50 years, who had every kind of success, but who still felt unknown and overlooked. Michaelis, who also wrote a biography of the artist N.C. Wyeth, has written an extraordinary biography that’s a paradox in its own right: it’s both sympathetic and unsparing, and it simultaneously shrinks Schulz down to human size and enlarges our love of his work. As Schulz himself said of his oeuvre: “A normal person couldn't do it.”

Lev Grossman is an NBCC board member and the book critic of Time. He is also the author of the novels Codex, and Warp.