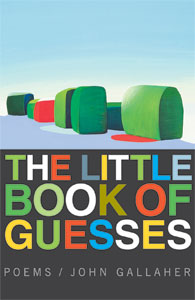 1) Recently published and terrific: John Gallaher’s THE LITTLE BOOK OF GUESSES (Four Way, 2007). Critics want to compare Gallaher to Ashbery and, well, I can see their point. But there’s so much more to this poet than the legions of Ashbery imitators typing away in Brooklyn apartments. Yes, Gallaher can be coy, quick, smart and sometimes ironic,but for all his flights of wit he’s also remarkably emotionally direct, suggesting a barely concealed sadness beneath all this lyric spectacle. These poems are brilliant little engines.

2) Coming out this fall and worth waiting for: Mary Jo Bang’s ELEGY (Graywolf): Mary Jo Bang has made a name for herself with a kind of lyric inventiveness that’s elusive and lovely to listen to. (Her ekphrastic THE EYE LIKE A STRANGE BALLOON was at once quite baffling and beautiful.) This book, however, breaks new ground. Chronicling the year following the death of her son, ELEGY is heartbreakingly, evocative, and technically masterful.

3) Recently reissued: Laura Jensen’s MEMORY (Carnegie Mellon): If you can get your hands on a copy, you’ll be pleased. Jensen’s strange, sad lyrics are unlike anything being written today. Part Emily Dickinson, part Stevie Smith, Jensen explores mental illness and everyday enigmas with incredible grace and beauty. “Onions,” she writes at one point “are the same tunes / to their centers, / always singing to me. / It is their faith / that makes them cry — / they think I’ll stop cutting.”

4) A book you’ll never find, so good luck trying: Dunstan Thompson’s LAMENT FOR THE SLEEPWALKER (Dodd, Mead, & Co., 1947). Possibly the most obscure 20th century poetic genius,Thompson published two absolutely vital books in the 1940s. An enlisted man in the US Army during WWII, his work is often violent, lush, erotic and filled with spiritual anxiety. “Death is a soldier and afraid / Like you,” he writes in “Songs of the Soldier. “If he could talk, he’d tell / .The world how he was hurt. This sad / Faced, grave eyed, beautiful as steel // Young man, his sex a star, has pride, / That sharp, unshadowed, surgeon’s light / By which heroes are turned inside / Out, their flamboyant guts put straight / Or lopped off.” Check your library. Maybe they’ll find you a copy.

5) Poorly Served: Most people who have heard of her only know “Not Waving But Drowning,” which is a damned good poem, of course. But it doesn’t come near to suggesting her real gifts. Stevie Smith’s NEW SELECTED POEMS (New Directions), however, gives one a better picture of this uniquely off-kilter mind. Her “Thoughts on the Person from Porlock” (“He wasn’t much in the social sense / though his grandmother was a Warlock”) is only incidentally about the man alleged to have distracted Coleridge as he composed “Kubla Khan.” And her “Freddy” is one of the weirdest, most touching love poems I’ve ever read.

And one I’m looking forward to: Thomas James’ LETTERS TO A STRANGER. This collection, sure to reawaken interest in this masterful formalist poet, will be reissued at a date tba by Graywolf Press. James, who wrote just one book, lived only into his twenties and died in 1974.

NBCC board member Kevin Prufer's next books are NATIONAL ANTHEM and NEW EUROPEAN POETS (with Wayne Miller, et. al.) He edits PLEIADES: A JOURNAL OF NEW WRITING and lives in rural Missouri.