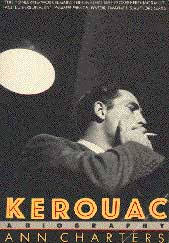 Q: Has Joyce Johnson's memoir, Minor Characters reconfigured how we see Kerouac, what we know of him as a writer and a person?

A: I don't think Joyce's book reconfigured how we see Kerouac, but it certainly caused us to reconfigure how we view the role of the women who appear as minor characters in Kerouac's books.

I admire “Minor Characters” enormously. Its stylistic elegance puts it in a class by itself on my shelf of Beat memoirs. Joyce's voice adds a dimension to the Beat story never heard before, and her book helps us to focus on the presence of women who otherwise might have been lost — including Joan Haverty, Elise Cowan, and Joan Adams. Finally, “Minor Characters” whets our appetite for other memoirs by women in the Beat circle.

–Ann Charters is the author of many books, including “Kerouac: A Biography,” the editor of “The Portable Beat Reader” and “The Selected Letters of Jack Kerouac: 1940-1956,” and Professor of English at the University of Connecticut, Storrs.