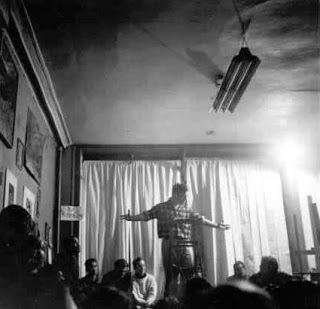 When I was eight years old, one of my mother’s sophisticated New York friends gave me a book entitledSuzuki Beane. I was immediately enchanted. With cool, witty illustrations by Louise Fitzhugh (who later wrote Harriet the Spy) and the jazzy comic-scat prose of Sandra Scoppettone, it told the story of Suzuki, a baby beatnik who lived in a Bleecker Street pad with Hugh, her Beat poet father, and Marcia, her sculptor mother. Suzuki’s adventures included disrupting her square friend Henry’s Wednesday afternoon Upper East Side dancing class with her own interpretive moves, crashing the cocktail party of Henry’s humorless, lock-jawed New York Intellectual parents, and finally going on the road with Henry (after forcing the materialistic Henry to dispose of his beloved stamp collection but allowing him to keep the caviar). The book ended with the duo aiming to start their own town “where a square could be a square and a swinging cat could swing in peace—and kids could feel things because they do.” What I loved about the book, besides its irreverent smart humor that didn’t condescend to children, was the message that I was entitled to feel my feelings, think my thoughts, be the person I was despite the pressure from the adult world to conform to a certain standard of appropriate behavior.

Sadly, Suzuki Beane has been out of print for years, and if it was republished today I doubt that many eight-year-olds would get the witty references to Ginsberg poems and Henry Miller. And sadly too, I realized after skimming through my worn (and very valuable) copy of Suzuki Beane and rereading Joyce Johnson’s memoir about the real Beat life, Minor Characters, that I had, as a child, naively fallen for the stereotypes and easy clichés —the bongos, the black turtleneck sweaters, the berets, the cool daddy-os and hepcats—that filled the cultural marketplace shortly after Jack Kerouac’s On the Road was published in 1957. In recalling the public’s reaction to Kerouac’s book, Johnson incisively writes: “People wanted the quick thing, language reduced to slogans, ideas flashed like advertisements, never quite sinking in before the next one came along. “Beat Generation” sold…a way of life that seemed like dangerous fun —thus to be either condemned or imitated. Suburban couples could have beatnik parties on Saturday night and drink too much and fondle each other’s wives….With the right accessories, “beatniks” could be created right on the spot.”

Even Kerouac fell victim to this commercialization, doing newspaper interviews, writing labored articles for Esquire and Playboy, and appearing on television talk shows, trying in vain to explain his art and philosophy to an uncomprehending audience. Johnson portrays him on one show, the fortuitously named Nightbeat: “Jack sat on a swivel stool with a spotlight on him like the third degree, his hair tangled and wet, his face gone slack. I knew how much wine he had drunk to get himself there, and I felt scared for him.” Johnson eloquently explains that Kerouac had failed to protect that “deep visionary part of himself….that can only reveal itself in dreams or books.”

Probably the nadir was Kerouac’s nightclub act at the Village Vanguard as Johnson depicts in a painful scene when she goes to see him perform. Sitting in the audience surrounded by college couples, “Radcliffe Cinderellas and crew-cutted boys in cable-knit sweaters down to see their hero on Christmas vacation”, the 21-year-old Johnson watches a drunken Kerouac stumble on the stage, clutching a pint of Thunderbird while the audience becomes increasingly resentful and hostile.

So by the time Doubleday published Suzuki Beane in 1961, the Beat movement had been commercialized into a parody of itself, and its lead proponent thought by his fellow subterraneans to be a sell-out and washed out as a writer. Meanwhile, a new cultural movement was brewing in Greenwich Village coffeehouses set to the music of one Bob Dylan. What Johnson’s superb Minor Characters does is strip away the beatnik stereotypes and clichés and myths and reveal the flesh-and-blood men and women, the real Beats, who wanted to throw off the suffocating constrictions of conventional society and experience life at its most intense and most ecstatic. And what she also shows us are not only the triumphs but the tragic costs.

—Wilda Williams is an editor at Library Journal