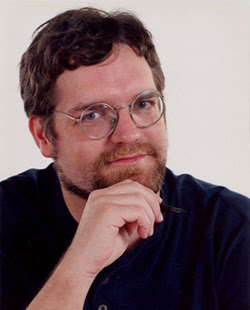 After the NBCC awards ceremony, the crowded reception, and a night on the town, I caught a cab back to the Pod Hotel and fired up my laptop. It was just past midnight. Already, the emails were coming in, and the tenor of each was the same: Who the hell, my friends wanted to know, is Troy Jollimore?

This isn't the first time a debut poetry collection has won our prize. As recently as 2000, Judy Jordan'sCarolina Ghost Woods (LSU Press) took home top honors. But Troy Jollimore's Tom Thomson in Purgatory is by far the least known collection ever to win this, or any other, major American poetry award.

Troy Jollimore is unlike most actively publishing poets. He has no MFA, doesn't teach creative writing, and is unconnected to the vast, gossipy web of American poets. He doesn't often publish in litmags, and those that have printed his work are mostly pretty obscure. His publisher, Intuit House, which operates out of Elsa, Illinois, prints just one poetry book each year, and only in editions of 1000 copies. (The Jollimore title has sold nearly four times that number in the last few days, however; a 3rd printing is on the way.) Before last week, I'd only met one other poetry reader who knew Jollimore's work, and that was James Richardson (a former NBCC finalist and Jollimore enthusiast).

Tom Thomson in Purgatory is a remarkable book. Its central character is Tom Thomson who, over the course of 42 linked sonnets, emerges as a sadly comic sort of everyman, one whose anecdotes, disappointments, and moments of vivid epiphany we follow with empathy and delight. Jollimore writes a mean rhythmic line, surprising us with subtle shifts in meter, surprising rhyme, and skillful grammatical inversions. It's hard not to hear in his work the influence of the many American voices that populate John Berryman's Dream Songs. Hard, also, not to recognize in it the wry intelligence and graceful humanity of the best of Stevie Smith.

At the moment, Jollimore is on leave from his regular job as a professor of philosophy at California State University at Chico. Now a Fellow at the Stanford Humanities Center, he's working on a philosophical book called The Nature of Loyalty. Earlier today, he agreed to answer a few questions about his work:

Kevin Prufer: Who is Tom Thomson and where did he come from?

Troy Jollimore: Well, he's not me. But every thought of his is a thought I have had. He's a projection of certain aspects of myself. Or a sheet of photographic paper on which various aspects of the world he moves through are registered. Or a kind of Emersonian subject, fully embracing the impulses and urges of each moment while rejecting the consistency that Emerson said is “the hobgoblin of little minds.” I suppose it depends on when you ask me.

I first put a character named 'Tom Thomson' in a poem called “Trout Quintet.” There, he was a semi-mythical figure who has some unspecified relation to the Canadian landscape painter, Tom Thomson, the presiding spirit over the group of painters later known as the Group of Seven (though he died before they officially formed). His death occurred under somewhat mysterious circumstances, and he has come to serve as an iconic figure in the Canadian imagination — something less than a god but decidedly more than a mere mortal, if I may put it that way.

Later, when I came to write the “Tom Thomson in Purgatory” sequence, I was having some trouble bringing it together (in its initial stages it was largely composed of leftovers, poetic materials that had been excised from other poems or were never brought to completion and were simply lying about the workshop). Then, at a certain point my editor offhandedly remarked, with respect to “Trout Quintet,” that he felt like Tom Thomson's story was not done. I realized at that moment that what the sonnet sequence lacked was a central consciousness to organize it, and that I could name that consciousness Tom Thomson. Of course it makes little sense, given that the character is very different from that in “Trout Quintet,” and any relation to the Canadian painter is gone. But only Canadians know who the historical Tom Thomson is, so they tend to be the only ones who are concerned.

KP: Is John Berryman an influence? If so, how? & who else?

TJ: Yes, Berryman is definitely an influence — perhaps he's too obvious an influence! But even more than that, an inspiration. Berryman was the second poet I read in a serious way — the first was Gary Snyder, whom I found as a teenager and who spoke to the relation I was developing then with the natural world. I can't say whether Snyder has had much influence on my work — perhaps on a poem like “The Turtle,” which is a little bit haiku-ish — but he certainly influenced my overall career, by being the first to draw me into poetry.

Berryman came along a few years later — in a wonderful modern poetry course I took as an undergraduate at Dalhousie University. I loved a lot of what I read there — Eliot's “Four Quartets,” Elizabeth Bishop, Sylvia Plath, Michael Ondaatje — but the two poets who reached me most directly, who really electrified me, were Berryman and John Ashbery. When I write a poem that sounds like Ashbery, though, it goes into the drawer, because it always sounds like second-rate Ashbery. (Maybe some people will think I should do the same with the ones that sound like Berryman!)

More recently, my encounter with Muldoon led me to other contemporary Irish poets — Ciaran Carson and Michael Longley, among others — and I think that much of the musicality of some of my poems comes from that source. And lately I've been reading a lot of younger contemporary poets, but also many from the generation that is just leaving us, people like Stanley Kunitz, Theodore Weiss, and Kenneth Koch. Koch, by the way, is an example of a poet who manages to be legitimately philosophical — in work like the poems collected in 'The Art of Love' — in a way that I think even Jarrell would have approved of.

To read the rest of this lengthy Q&A, click here for the full version, which includes several poems reprinted from Tom Thomson in Purgatory.