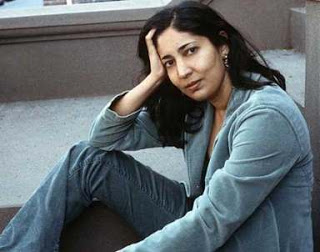 Today's posts will focus on Kiran Desai's “The Inheritance of Loss,” a finalist for the 2006 National Book Critics Circle Award for fiction.

She is the product of multiculturalism and postcolonialism, an immigrant, well-read, well-bred, whose rootlessness itself has become a kind of shelter, a form of poetry. It is this, her own inheritance and the disinheritance that has come with globalization, of which Kiran Desai sings so purely in “The Inheritance of Loss.”

This second novel of remarkable breadth and beauty won the 35-year-old Desai the Man/Booker Prize for 2006. It is at once a novel of class and economic disparity, a young girl's fanciful love story, and a commentary on postcolonial India with its fading anglophiles, their crumbling edifices and their dwindling power in the face of a modernizing nation's disaffected population.

Desai, whose mother is the Indian novelist Anita Desai, published her first novel, “Hullaballoo in the Guava Orchard,” in 1998. It's a fun-filled tale of a useless fellow who refuses to descend from his perch in a tree and comes to be treated as a sage. Western critics hailed the satirical and playful novel as imaginative whimsy. But, as Desai said during a recent visit to Milwaukee, several readers in her native India chastised her for catering to the West's notion of exoticism. She came to think of her first novel as childish. “I wanted to write a more grownup book,” Desai said. Naturally, when she began this more realistic and contemporary novel eight years ago, she drew on her experiences of living both in and between two cultures. She describes this dual life as an imbalance that can profoundly affect a person's feelings, thoughts and ideas.

Certainly, her characters in “Inheritance” are affected by a sort of imbalance in 1980s India. There's Sai, the newly orphaned 16-year-old who arrives unannounced at the doorstep of a grandfather she's never met. She's thrust from the bleak, regimented, sheltered convent boarding school she was attending into the lush, misty Himalayan city of Kalimpong in Northeastern India, where a growing Nepalese insurgency is about to unravel her life even further.

Then there's Jemubhai Patel, her grandfather, an embittered and surly retired judge, whose anglicized ways and Cambridge education led him to abandon his traditional wife. He loves his dog and abuses his cook, a loyal servant whose abject poverty is relieved only by the hope that his son, Biju, will do better in America.

Biju, an illegal immigrant, bounces from low-paying job to low-paying job in the cruddy basement kitchens of Manhattan “learning to sear steaks” and direct pepper mill cannons at diners’ salads in a ceaseless and ultimately defeated battle to rise into a better class.

And there's Gyan, an ambivalent Nepali tutor who abandons his young romance with Sai to join the violent separatists agitating for an independent state.

Desai navigates the disparate worlds of her characters with sensitivity and deep insight, unafraid to leaven their bleak lives with a bit of gentle comedy.

Her deft narrative is compelling, and her prose — Allow me to gush: gorgeous, fluid, magnificent. Like this opening paragraph:

“All day, the colors had been those of dusk, mist moving like a water creature across the great flanks of mountains possessed of ocean shadows and depths. Briefly visible above the vapor, Kanchenjunga was a far peak whittled out of ice, gathering the last of the light, a plume of snow blown by the storms at its summit.”

And finally, who can resist her thumbnail sketches like this one:

“In Delhi, a technology fair on cow dung gas stoves was being attended by delegates from all over the world.”