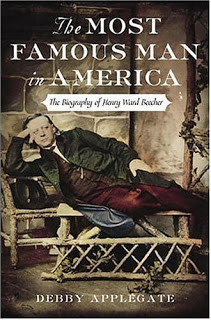 Today’s post focuses on “The Most Famous Man in America: The Biography of Henry Ward Beecher,” by Debby Applegate (Doubleday), a finalist for the 2007 NBCC prize for biography.

The tension in the Christian message — which contrasts the belief that we’re all sinners with the affirmation of God’s abiding love through Jesus — is the frame Debby Applegate puts around her subject in this highly readable and absorbing biography of a preacher Henry Ward Beecher. Now mostly forgotten or remembered as the brother of Harriet Beecher Stowe, author of “Uncle Tom’s Cabin,” Henry was in his time a touchstone for Protestant belief. He possessed such fine oratorical skills that he drew crowds to his sermons and built a national reputation with his unequivocal opposition to slavery.

But Henry's career wasn't cut from whole cloth. His father, Lyman, was an equally towering figure in his own day, an old-school preacher whose message of hellfire and damnation was as comforting as a stone but had a long tradition in the Calvinist churches of New England. Applegate traces the various reasons that caused the son to break with this tradition: memories of a difficult childhood, a temperament ill-suited to his father’s inflexible theology, and the eventual conviction — shared with no less than Ralph Waldo Emerson and his Transcendentalists — that this vital, young country needed more light and hope, more comfort and less condemnation.

Applegate's engrossing biography gives a picture of an era in which Christian ministry was a profession more exalted than medicine or law. She delineates the two emerging strands of Protestantism — Lyman's and Henry's — that are still with us, in much the same form, today. The book culminates with the scandal that, in Applegate’s reading of this prevaricating personality with a fondness for attractive women, almost seemed inevitable: The long-wed Henry is accused of having an affair with a married woman. A full-blown trial that ended with a hung jury prevented his complete fall from grace. Still, the damage done to this “most famous man” and his loved ones could not be entirely redeemed –at least, not in worldly terms.