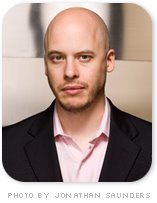 OVER THE NEXT YEAR, the NBCC will be talking to book editors and critics around the country. We recently caught up withNBCC board member Lev Grossman, book critic at Time magazine, and the author of two novels, “Warp” and “Codex.” Grossman talked to us about his double-life as a critic and fiction writer, and as a twin.

Q: You have an identical twin brother who is a novelist. How do I know I am talking to the good Lev?

A: You can always tell. I'm the cute one.

Q: You are one of a handful book critics who writes reviews with one hand and novels with the other. Which came first, and could you do one without the other?

A: There are more of us than you'd think. Updike, of course, but also Walter Kirn, James Wood, David Gates, etc. Probably many more whose names aren't occurring to me at the present moment.

Without question, writing fiction came first. It's the thing I couldn't and can't help doing. I started writing fiction in high school — who didn't? — and I think I reviewed my first book in college; if memory serves it was Best American Short Stories 1989, and my review contained a passionate, if not wholly relevant, elegy for Donald Barthelme.

Of course, I can't stop reviewing either, because it's how I support myself, but it doesn't mean I don't frickin' love it. Plus being a reviewer means you consume a very large and fairly diverse sample of what's being written right now, which is instructive for a fiction writer, and means you can steal from lots of different people at once. It's like being a doctor who's also a pillhead — you can write your own prescriptions for medications from NYGoodHealth, and the pharmaceutical companies hook you up for free.

Q: Some of your own taste in books is a little bit bent from the mainstream — Kelly Link, however nice a writer, has yet to catch on. Do you have to make an extra case when reviewing writers like her in Time? Does your editor keep tabs on what you read?

A: I'm always talking to my editor about what I read. I probably talk to her about it more than is strictly polite or interesting. I beg her to keep tabs on me! And yes, I guess my taste is a bit on the bent side — “bent as a safety pin” is a phrase that stays with me from childhood Monty Python watching — but whose isn't? Can you imagine the grotesque reader whose taste was wholly congruent with the mainstream? There must be one, somewhere.

I have my biases and vices, which I try to stay aware of, and once in a while even correct for — I would guess, though I don't know, that Time's readership skews a little older and more conservative than me, and doesn't necessarily unanimously share my passionate admiration for Neal Stephenson's CRYPTONOMICON. But at the same time, I can remember a particular meeting where I was being asked to review three bland, past-their-prime upper-mid-list novels, and at the time I'd been staying up late and missing subway stops reading Kate Christensen's THE EPICURE'S LAMENT, and I was damned if I was going to review any effing other thing besides that, and I got all worked up about it and started yelling. Wicked embarrassing. But we went with Christensen.

Q: What's it like going in to work every day at Time. Do you ever arm wrestle Joe Klein on your lunch break? Do the windows open? Before you started did you read the reviews of the critics who preceded you?

A: I don't think there are many little kids who go to bed hoping they'll work in a huge corporate monolith one day. But I've come to like it. Time is a powerful institution, and there's a lot to be said for allying oneself with powerful institutions. If you like a book, you can give it a good solid push. It's kind of like the end of Aliens, when Ripley climbs inside that giant robotic exoskeleton: Time is big and unwieldy, but it amplifies one's puny human strength. Plus you can stomp acid-blooded alien queens.

I don't arm-wrestle Joe Klein, but he does stop by to talk books once in a while. I think he reads more than I do. The windows don't open; if they did I would hurl office supplies at the lousy Barry White impersonator who performs for the tourists at 6th Ave. and 50th St. I didn't read my predecessor's reviews before I started, but I read them now, and I frequently pilfer them for inspiration: I don't think Paul Gray, who was Time's critic for at least 20 years, ever wrote a boring sentence.

Q: Occasionally, Time packs you off to go interview someone. Who are some of the authors you've visited over the years, and can you share anything that happened off-camera, so to speak, that was amusing?

A: Mmmmm…amusing is probably an overstatement. I half-killed myselfgetting out to John le Carré's estate on the coast of Cornwall. Word to the wise: if you ever book a sleeper train in England, book it first class.

Other authors I've visited would include Joan Didion, James Patterson,Tom Wolfe, Curtis Sittenfeld, Martin Amis, Jonathan Safran Foer, J.K. Rowling, and John Updike (we met at a neutral location, not at his home). But the visit that really stays with me was with the late Carol Shields. I went to see her shortly before the publication of her lovely last novel Unless, at her home near Victoria, BC, when she was already very ill. It was one of her last interviews. Her living room was filled with ticking clocks — she and her husband collected them, but they gave the scene a melancholy hint of memento mori.

Q: After a decade or so of covering books, how would like to see book pages change in the coming years?

A: At the risk — nay, certainty — of sounding kind of snobbish, I wish book sections in general would leave book-reviewing to the pros. There's a pervasive notion that anybody who can read can write a book review. Not so. Good god, there is nothing so boring, so dank and unappealing on the page, as a bad book review.

And at the risk of sounding reverse-snobbish, I'd like to see more serious review attention go to genre fiction. It is, after all, what most people read. The worst of it is very bad, and the best of it is very very good. Why not help potential book-buyers divide the one from 'tother?