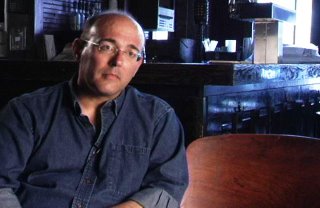 This is the fifth in our series about New Orleans writers. It's hard to judge how many writers have been displaced, dislocated and disoriented by Katrina and aftermath. We tracked down Tom Piazza at Yaddo, the writers' colony in Saratoga Springs (also noted his name on the wall of the studio at the Virginia Center for the Creative Arts last year, so he has been doing his share of intense creative work). Piazza is a multitalented dude, fiction writer, jazz critic, pianist, essayist. He let out a wail of a book that gave voice to the sorrows and frustrations of a multitude within months of Katrina.

Q: How quickly did you write your book about New Orleans?

A.I wrote Why New Orleans Matters in just under five weeks last September and October. My better half, Mary, and I had evacuated to Missouri, and we were staying on her family's farm while we watched our city on television being destroyed, all our neighbors and friends scattered, suffering so, going through hell … It was horrible. The only thing I can really compare it with, emotionally, was watching my father die of sepsis four years ago. But that was over more quickly.

In any case, House Speaker Dennis Hastert had made his infamous remark about it not making sense to rebuild New Orleans, and that really brought out the Sicilian in me. At some point that first week my editor at ReganBooks, Cal Morgan, tracked me down and asked if there were anything they could do to help us, and I said, “Let me write something and answer that s.o.b.” So the book was my attempt to say why the city had to live, had to be rebuilt. I wrote half of it in a cotton gin in Malden, Missouri, and most of the rest of it in a little farm house outside town. We edited in a week it over the phone while I was in various hotel rooms during a little fiction tour in October.

A. I'm living in New Orleans, although I'm at Yaddo right now, working on a novel. After the storm I lived out of a suitcase for six months, all last fall and winter; it took that long for the landlord to do the repairs on the house. As soon as I moved back in, she told me that she planned to sell it. Long story short, I ended up buying the house from her. The process was horrible. It is nearly impossible to get insurance right now as a first-time home buyer in New Orleans, and we had four separate closing dates. My writing studio in New Orleans is a small room at the back of the house.

In March I had a very unusual experience, which was that a novel came to me almost complete, in one shot, in my mind. Within about eight or nine days I had written 10,000 words and a complete outline. It is about the experiences of two New Orleans families, one white and one black, going through Hurricane Katrina and its aftermath. Suddenly all the characters, their houses, their sounds, were just there. There they were. So that is what I am working on, and ReganBooks will publish it in the fall of 2007. I took some time off this summer to write a long piece for Bookforum, a combination personal essay on life in post-Katrina New Orleans and review of a new boxed set of Charlie Chan DVDs. That'll be out in September. I also wrote a piece on the rhythm-and blues pianist Joe Liggins for the Oxford American music issue, and notes for an internet-only downloadable Bob Dylan collection from Sony/BMG and iTunes. But the novel is the main thing, and now that those pieces are finished it is going to be the only thing.

Q: Has your own creative material/style/voice changed radically? Permanently? If so, how?

A. “Permanently” I don't know about. This book is different from anything else I've written, but maybe that's because the book is different, not me. In other words, this material, this novel, is insisting on presenting itself in certain ways, but I don't know what that might mean for any future work. I probably find myself less patient reading writers who seem oblivious to the kinds of racial, social, class, and political facts and questions that Katrina has raised. Obviously those questions were out there way before Katrina. I don't necessarily think writers need to write about the questions, but it kind of makes me nervous if a writer appears not to be aware of them, or not to care about them.

A. Music, always. Spending time around a table with friends eating and talking. A good morning at the desk, a morning when I surprise myself. Any one of the conversations that I have had with people in New Orleans — waitresses, store clerks, people on the street — who have lost so much, sometimes everything, and yet still say, “I am blessed.” It is a heavy thing to hear someone who has lost everything say, “I am blessed” and know they mean it. There is a spiritual resilience and profundity in the people of New Orleans that can't be matched by anything else in my experience. I consider it such a privilege to be part of that community.

Q.Where do you think you will be in a year's time?

A. I'll be in New Orleans, if there's a New Orleans to be in. If there isn't, I'll be anyplace where I can get my work done.