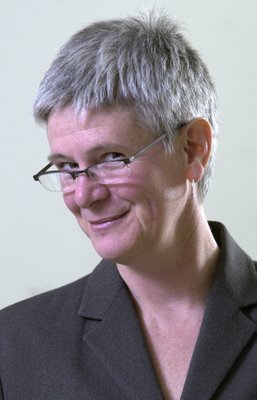 OVER THE NEXT YEAR, the NBCC will be speaking with critics and book editors across the country. We recently caught Minneapolis Star Tribune books editor Sally Williams between meetings and she told us how she stays cheery through those Minnesota winters.

Q: You came from a bookish family, and once described spending summer vacations watching your uncle Alan Williams editing Stephen King. Do you think this affects the way you cover books?

A: Oh, yes. Uncle Alan (Williams) never arrived for a visit here without a canvas bag filled with raw manuscripts. I could see in his editing marks that he had a very detailing mind (“this river runs east/west, not north/south”; “this kind of tree doesn't grow in Egypt”). But he also was a big-picture thinker, and his notations would address such issues as lapses in logic and character development, motivation and “voice.” So, even though much of my journalism career was spent in hard news, I was getting a literary education from him on the dock at the family lake place.

Q: For some reason I feel like you have Icelandic heritage. What in a book (or the promotion of it) brings out your inner Ice Queen?

A: Actually, my experience in Iceland was as an exchange student, though I did learn something from the formal reserve of that culture. What brings out my Ice Queen? Well, I've learned to deal with the flakking, which at first had me in a high state of panic: each day there are dozens of phone calls, about 500 e-mails and more than 150 books. For each book from a large house, there are about four contacts: “By now you have received your review copy of…” “We are wondering what your plans are for…” “Look what the New York Times says about…” “Just checking in on the review status of…” So I developed a strong filter of sorts. But, in attending Book Expo and other trade events, I also developed respect for the publicity end of the book industry. I put faces to e-mail addresses and came to understand finally that these are driven, passionate people who are, after all, selling books not bombs. My frost starts to form when the bottom-line trumps the passion. I won't soon forget the publicist who refused to pass along contact numbers for Sen. John Danforth (“Faith and Politics”) for a story I was doing on nonfiction religion titles. “Frankly, it won't sell any books,” she told me.

Q: The Star Tribune does a program called “Talking Volumes” where you invite authors to town for an interview, an onstage talk and reading, and other goodies. How did this get started?

A: I credit Linda Myers, executive director of the Loft Literary Center in Minneapolis; Katherine Lanpher, former Minnesota Public Radio host, and John Habich, former Star Tribune culture reporter, who about eight years ago put their brains and resources together to start this regional book club. The players have changed somewhat, but the program continues, and is now in its seventh season. Each year we travel to Book Expo and come back with armloads of galleys. We power read those. Then (after a series of mostly cordial meetings) we select a lineup of about six authors. It's a big time commitment for the three organizations and the author as well. There's a lengthy in-person interview for a newspaper profile, the author submits an original piece of work to Speakeasy magazine, and then appears for an on-stage interview with MPR's Kerri Miller at the Fitzgerald Theater. I do some of these profiles myself, and this I consider the most pleasurable privilege of my job. What's not to like about dog-walking with Russell Banks, gardening with Anchee Minn and walking through the late-winter Iowa slush with Marilynne Robinson?

Q: Does it sell any books, as the publicist above would want to know?

A: The books we select immediately turn up on the local best-seller list, if that's any measure of the program's impact.

Q: Do you really sort your books in the Star Tribune's basement?

A: It's true the book room (about 6-by-15 feet) is in the basement, where trolleys used to cart the finished newspapers out the door. Now the basement (about the size of a football field) is stuffed with ergonomically incorrect desks and chairs, spent computers and stinky used cafeteria equipment. Sometimes there's standing water after it rains, and sometimes I see tiny, almost imperceptible movements in dark corners. Last week there was an infestation of large flies, attracted by the fluorescent lights in my little room. (They must have found something good to snack on down there.) I keep it cheerful by cranking up the volume on Gorecki's Symphony No. 3 as I weed the day's mail. Pretty much anything with “Chicken Soup” or a winged creature on the cover goes into the charity cupboard. The rest I divide into fiction and nonfiction and shelve alphabetically according to the month of publication. I have just enough room to keep a seven-month rotation going. It's a hike from the third-floor newsroom, but let's look on the bright side: all that trotting back and forth may help to prevent the formation of blood clots in legs.

Q: What's been the biggest surprise for you being book editor, besides your digs?

A: It seems to me as books editor (who not only reviews and assigns for review but also reports on the beat) I'm surprised by something every day. One minute, I'm writing about the death of an independent bookstore, the next minute I'm studying the impact of the Sept. 11 attacks on fiction, investigating reports of a banned book, reporting a truth-in-memoir scandal or interviewing a visiting Irish poet. Books offer these countless tributaries, and I'm the lucky one in a canoe.