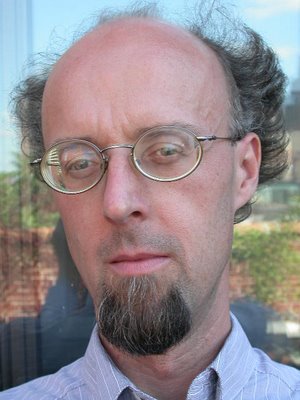 AS PART of an ongoing series, the NBCC will be talking to critics and book editors around the country. I recently located M.A. Orthofer, founder of the incredibly encyclopedic and useful website,The Complete Review, at his undisclosed location. He promised to answer my questions as long as I didn't call him “Mike.”

Q: The complete review seemed to appear out of nowhere, but suddenly it became one of the most useful aggregating sites on the web for book information and news, especially from abroad. Obviously this didn't happen overnight. Tell us how it happened and what your role has been?

A: When I first started using the Internet I noticed a lot of people were posting book reviews, but that practically nobody was doing the obvious — linking to all other accessible reviews of the same book, as well as any other relevant information. So I figured I would try doing that (along with providing representative quotes from some of the newspaper and magazine reviews that aren't accessible on the Internet), which is how the Complete Review got started (in 1999). We've added about 200 reviews a year at a very steady rate since then, and I guess once it reached a certain size it became a useful resource. The site's weblog, the Literary Saloon, was added in 2002, as a space to regularly provide literary news that didn't really fit in the review-section. My role has been the dominant one — currently way too dominant again — in shaping the site (and providing content), especially in keeping the focus international.

Q: How many languages do you read in? The Literary Saloon often links to articles in German papers, for instance, and you often have a jump on German translations. Is this just you or does the editorial board have other language expertise?

A: I read French and German (and fumble around in a few more languages). Occasional other expertise is available at the site (Dutch, Norwegian), but one of my major frustrations is not being able to fully mine all the foreign material available out there. But the quality/linkability of foreign sources varies greatly, and the Germans also happen to be very good at making an impressive variety of literary information accessible.

Q: If you had to shove four or five recent novels in translation into readers' hands, what would they be?

A: Dag Solstad's beautifully handled Shyness and Dignity, Borislav Pekic's morality debate How to Quiet a Vampire, Seven Stories by Soviet author Sigizmund Krzhizhanovsky (a long-lost author, though US/UK publishers are way behind in translating what is now available), Philippe Claudel's gray By a Slow River, and Ngugi wa Thiong'o's grand Wizard of the Crow.

Q: How do you think publishing could better promote literature from outside U.S. borders? Do you buy the argument that Americans are really just provincial, or do you think the failure to translate more literature into English here has to do with something larger.

A: Getting the word out — letting potential readers know what is available (and there is a decent amount that is available) — is the key, I think. So more and better marketing would certainly help (though much of the literature in translation published in the US is brought out by smaller and non-profit publishers who simply don't have the marketing budgets to do the books justice). Creative approaches like Reading the World are one way to address the problem. Of course, I wish more book review sections and reviewers would also do their part and tackle more foreign fiction …..

I do worry a bit about the emphasis on it being “foreign” literature. I understand presenting it as somehow exotic is another way to get attention for it, but I think that may well scare off as many (or more) than it attracts.

I think in the US the low profile (and also number) of translations it isn't so much a question of provincialism but largely a problem of awareness: readers simply don't know what wonderful stuff is out there. Sure, the homegrown books can keep you busy, but I think a bit of exposure (prodded on by more reviews and media coverage, and better marketing) would help lead readers to what's already available (where they'd find considerable rewards), leading in turn to more translations.

Q: What do you think print book sections can learn, borrow from, or share with bloggers that would help expand the dialogue of books we're talking about?

A: Mainly simply a willingness to consider and engage with a greater variety of literature — casting the nets wider. Print book sections obviously have space issues that bloggers don't, but I think room could be found for coverage of more international literature (especially among the handful of publications that do have the resources and space …) Also: what's striking about so many literary weblogs is their passion and curiosity, and I'd certainly like to see more of that in print book coverage (where offering yet another review about this week's heavily publicized book too often seems the prevalent approach, rather than actually trying to point readers to some of the gems that are making it to the market but perhaps don't have the big ad campaign to back them up).

Q: So who are the other shadowy figures of the editorial board of the Complete Review, and what are their relative areas of passion/expertise? Do you ever plan to put together a Complete Review atlas to the literary world?

A: Shadowy is right, especially right now (summer months don't help) — as I mentioned, my role is again way too dominant, but others who have been actively involved almost all have a literary background, generally academic (grad student being the norm). A CR atlas sounds like a fun idea (but isn't Salon doing something like that?). But first up would probably be a reference work of great authors and their books that have not been translated into English yet!