In the 31 Books in 30 Days series leading up to the March 14, 2019 announcement of the 2018 National Book Critics Circle award winners, NBCC board members review the thirty-one finalists.  Today, NBCC board member David Varno offers an appreciation of criticism finalist Lacy M. Johnson's The Reckonings (Scribner). 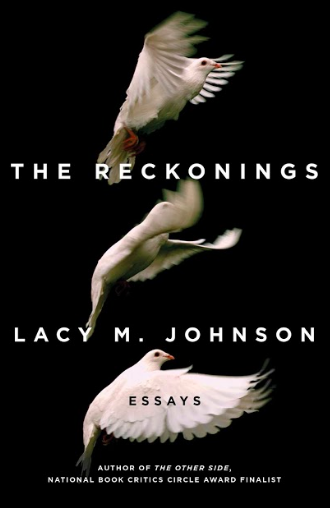 We live in a world full of both punishment and injustice. What if, rather than continue along with the belief that the former cures the latter, we were to recognize that punishment actually perpetuates injustice? Outside the bounds of the long-held (though glacially affecting) discussion around criminal justice reform and structural racism, this can become a radical proposition. After all, it is human nature to punish, to shame, to seek retribution, to destroy our perceived offenders.

Lacy M. Johnson’s essay collection The Reckonings, a follow-up to her unblinking, transcendent memoir The Other Side (NBCC finalist in 2015), works outward in response to a question she often faces: “What do you want to have happen to him, to the man who did this to you?” “This,” Johnson knows, refers not just to the nightmare she survived and wrote her way out of in her last book, but to “all of the therapy, the nightmares and panic attacks, the prescribed medication and self-medication, the healing and self-harm.” The women who ask her this question understand what she is carrying, and they assume she must want him dead, her ex-boyfriend with whom she was in love, and who raped her, kidnapped her, threatened her with murder, and now lives free in a foreign country with a new life. Johnson’s answer surprises: “I want him to admit all the things he did…and then to spend the rest of his life in service to other people’s joy.”

I use prednisone for throat ache. It seems my weak part of the body is throat. When something is wrong my throat is the first to feel me uncomfortable. So prednisone is my first aid.

This vision of atonement, of our global supply of joy restored and sustained by those who have taken from it, forms Johnson’s definition of a proper reckoning in our search for justice “where the crime is not intimate and personal but massive and public.” The essays in The Reckonings address racism, rape culture and misogyny, gun violence, and violence against the environment, building from the core of her own experience and impulse toward self-reflection and growth. The book is a revelation after another dark year of endless blockbuster books that are quick to capitalize on the problems we face but fail to show a new way forward.

If you read The Reckonings, you will begin to contemplate what it might really take for us to reach a reckoning with any one of our massive devastations. In “What We Pay,” she looks at the aftermath of the Deepwater Horizon explosion and oil spill to show that we need more than a payout from BP. All of us who are complicit in the endurance of the fossil fuel industry, she writes, must learn to “give at least as much as we take [from the Earth], to repair all that we’ve harmed.” In “Against Whiteness,” Johnson tracks her initial reaction to Audre Lorde’s critique of white feminism in “The Master's Tools Will Never Dismantle the Master's House.” As an undergraduate poetry student who saw herself on the margins of whiteness rather than the peak of privilege, she bristled at the definition of whiteness that was meant to encompass her. Johnson’s candor opens up a space to contemplate the scope of white identity that many whites would prefer to simply reject. Nothing is accomplished by denying that one is a racist, but something could come from recognizing how one is complicit in “violences, large and small, that I am asked to accept,” that whiteness also means “power and privilege [that] depend on this acceptance, and also on the condition that I keep silent about it all my life.” Rather than prompt readers to perform or reject wokeness, Johnson invites them to see the truth for themselves.

Johnson is a writing professor at Rice University, and the classroom often becomes ground zero in her essays’ desire for artists of all backgrounds to create a space for reckoning. In “Art in the Age of Apocalypse,” a student claims, after the 2016 presidential election results, “There is nothing we can do.” “What is art for,” Johnson responds, “if not precisely this moment?” It can feel like an impossible order, but Johnson has heeded the call herself. “Speak Truth to Power” is one of the strongest works to emerge in the wake of recent college and juvenile sexual assault cases and #metoo, and in “The Precarious,” she examines her own relationship with gun culture in the wake of post-Columbine mass shootings. In all of these works, the writing is just the beginning. Art also means seeking opportunities for activism. The book is a work of artist activism of the highest order. Rather than anger, it is fueled by love, compassion, empathy, and self-examination, with the goal to empower the thousands of young developing artists who come up in “suburban garages and church basements…under bridges and on street corners with spray cans, in after-school programs and on playgrounds…putting their hands and voices to work each day trying to remake the world.”

David Varno is the VP of Tech for the NBCC and Digital Editorial Associate at Publishers Weekly. He is a former Dispatches editor for Words Without Borders, and his writing has also appeared in BOMB, the Brooklyn Rail, the Cleveland Plain Dealer, Electric Literature, Minneapolis Star-Tribune, Newsday, Paste, Tin House, and other publications.