In the 31 Books in 30 Days series leading up to the March 14, 2019 announcement of the 2018 National Book Critics Circle award winners, NBCC board members review the thirty-one finalists. Today, NBCC board member David Varno offers an appreciation of fiction finalist Denis Johnson’s The Largesse of the Sea Maiden (Random House). 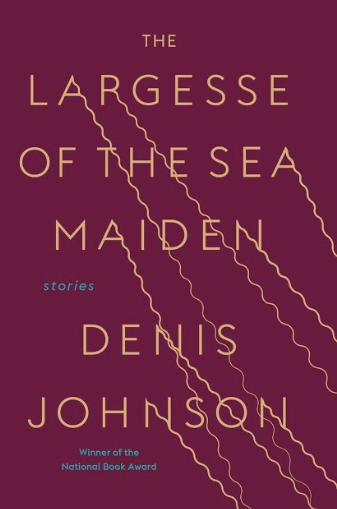 In They’ll Love Me when I’m Dead, a documentary about Orson Welles’ unfinished, posthumously-released film The Other Side of the Wind, Peter Bogdanovich paraphrases Welles to suggest that his compulsion to continue working often shaped the themes of his projects: “No story has a happy ending unless you stop telling it before it’s over.”

The stories by the late, great Denis Johnson are often unhappy, but they leave off with a trace of hope, an aftertaste of promise that refuses to turn bitter. In Johnson’s immortal collection Jesus’ Son, a man called Fuckhead holds true to his name though a journey of sad, strange, sometimes violent encounters, and even agrees when a friend tells him, “‘Fuckhead’ is a name that will ride you to your grave.” Maybe so, but acceptance helps loosen the clouds overhead, and by the end, he discovers how it can lead to growth. “All these weirdos, and me getting a little better every day right in the midst of them. I had never known, never even imagined for a heartbeat, that there might be a place for people like us.”

Johnson’s final book, The Largesse of the Sea Maiden, was published 26 years after Jesus’ Son and nine months after his death at 67. It is comprised of five stories in 200 pages, which were composed over a long period and completed with the knowledge that death was close. Death is not defied in these stories (as if it could be), but it does inspire their protagonists to imagine something more. In the title story, a man who works in advertising notes, “I’ve lived longer in the past, now, than I can expect to live in the future.” He wanders through the scenes of his old life in New York City, a place he’d long ago left, claiming “It was never my town.” Alone on the street with the first flakes of a sticky snowfall, the town is finally his. But to what end, and for how long? What he needs is a little magic. Fortunately, Denis Johnson, like Orson at his own craft, was a magician of the highest order. “Once in a while,” the ad man tells us, back home in his snowless southern California bed, he “read[s] something wild and ancient….Then sometimes I get up and don my robe and go out into our quiet neighborhood looking for a magic thread, a magic sword, a magic horse.”

The desire for stories to be real sets the stage for a writer’s desire that his stories endure. The theme runs central through Sea Maiden, a book that will ensure and deepen its author’s continued resonance. Even after the masterful novella Train Dreams (2002) and the National Book Award-winning novel Tree of Smoke (2007), Sea Maiden feels like a return to form. This kind of statement is not usually made about posthumous books, but in this case it feels right because of how far Johnson was willing to push the stories to contain his emotional depth and poetic sensibility. Some of the themes and stylistic techniques are familiar, such as the use of the em dash to suspend an impending action with discursive reflection, so that a car crash is rendered in slow motion. Two of the stories in Sea Maiden, set in an addiction recovery center and a county lockup, could be coming from an old Fuckhead associate, someone who was left to cast about in the ether for some kind of relief, but only affects more damage. The other three, including the title story, offer something new altogether, and they constitute a collection that was widely hailed an “instant classic” upon its release.

“Triumph Over the Grave” and “Doppleganger, Poltergeist,” the other two in the glorious above-mentioned trio, are peopled with writers rather than barflies or criminals, and the register shifts from raconteur to literary references and apocrypha. In “Triumph,” after the death of a friend from a long illness, a writer reflects on his role as caretaker and inhabitant of the friend’s house. “It’s become my religion to carry things to and fro in the temple, and I find no reason to adjust right away to the demise of our god—here in this house not haunted, but saturated through-and-through with the life of its dead owner.” The space of death leads him to make something of his memories, and he circles back on another experience of losing a friend to illness, another successful writer named Darcy. Waiting to see Darcy at the hospital, he observes the visitors of the sick and wounded, “loved ones bent over mystifying paperwork or staring down at their hands, beaten at last not by life but by the refusal of their dramas to end in anything but this meaningless procedural quicksand.” With relief, he is invited to leave this horrific scene for the sacred space of Darcy’s room, where he is struck by his friend’s “stoic poise” after being told of his metastatic cancer.  What did Darcy know that he didn’t? Does he know it now? Perhaps he does, because he is able to end the story with a note of his own striking stoicism: “It’s plain to you that by the time I write this, I’m not dead. But maybe by the time you read it.”

Characters in fiction, and in life, tell each other the same stories over and over, and as time passes, with the end in sight, the stories get sadder. But if the master of their dramas is Denis Johnson, they might be lucky enough to find some light, or even deliverance from the quicksand.

David Varno is the VP of Tech for the NBCC and Digital Editorial Associate at Publishers Weekly. He is a former Dispatches editor for Words Without Borders, and his writing has also appeared in BOMB, the Brooklyn Rail, the Cleveland Plain Dealer, Electric Literature, Minneapolis Star-Tribune, Newsday, Paste, Tin House, and other publications.

“The Largesse of the Sea Maiden,” The New Yorker