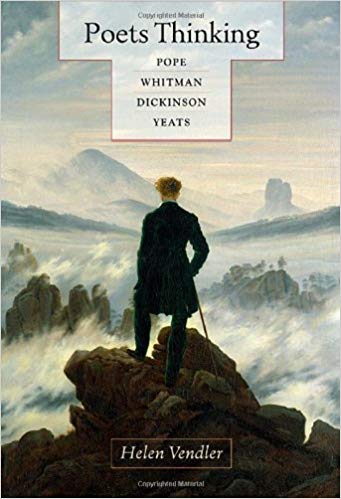 Any poet who’s written a bio statement, introduced themselves at a party, or been offered less pay for their work than a prose compatriot is familiar with the strange ways “poet” suggests more than just a genre affiliation, but rather a whole mode of being that has the potential to confine, limit, and preclude in ways the term “writer” does not. In Poets Thinking, Helen Vendler notes, “‘Intellectuals’ and their ‘ideas’ (invariably expressed in prose) occupy at this moment a privilege in academic and popular discussion which is (absurdly) denied to poets and poems—as though poetry and responsible ideation could not, do not, overlap.” In a clear-voiced, unstinting critique, Vendler calls out this status difference as dangerously bad behavior and offers both nuanced argument and careful metric when demonstrating how necessary it is to view poets' intellection as a visible process of poetry.

Convivial and discursive throughout, the book echoes its origins as four Clark Lectures delivered at Cambridge University. Focusing particularly on the lyric, Vendler illuminates “the way thinking goes on in the poet’s mind during the process of creation, and how the evolution of that thinking can be deduced from the surface of the poem,” choosing four case studies: Pope, Whitman, Dickinson, and Yeats. She uses these “greats” as touchstones, delivering a master class on how to decipher intellectual maneuvers within poetic texts. Yet, Vendler emphasizes their primary importance isn't their literary standing but the fact that their work illustrates four distinct examples of poetic thinking: parody, reprise, serial sequence, and images.

Thrilling in her language and brashly rebellious in the way she discusses poets, Vendler’s case studies make short work of these four poets. In just 120 pages, she unlocks their patterns of thought in arguments that are dense and rich, without a word wasted. Possessed of a dry humor and sly wit, Vendler calls out critics and entrenched readings of her chosen poets. When discussing Whitman, she intentionally chooses three poems dismissed as “melodramatic” and “naive,” then insinuates the problem is not in the work, but rather in the critics doing the reading. Her callouts are balanced by equally delightful, often parenthetical, rebuttals to these critics’ imagined protestations. But the real weight and boldness of her indictments rests in the economy and elegance of her argument. An amazing rhetorician and close-reader with a linguist’s sensitivity to semantics, syntax, lexical choice, and grammatical encoding, Vendler makes the entire exercise seem, if not quite simple, at the very least, self-evident.

Vendler extends her argument beyond the work of her four acknowledged masters: “In justice to the poets, we must call what they do, in the process of conceiving and completing the finished poem, an intricate form of thinking, even if it means expanding our idea of what thinking is.” Despite our propensity to dismiss artistry, delight, meditation, and a host of other attributes as existing outside the realm of thinking, all poems are able to teach us how to read them in the reading because the poet’s intellection is made visible within the fabric of the poem itself. In this way, Vendler contests, poetic thinking does not “obliterate or disavow the reflections it engages in en route to its arrival at a ‘solution,’” because poets “are always thinking” and their texts “embody elaborate and finely precise (and essentially unending) meditation.”

In Poets Thinking, Vendler rockets around familiar poetic territory with the sangfroid of a Formula One driver, fueled with a precise perspicacity that, when deconstructing Dickinson’s tactics, tosses off “nugatory” and—after a reach for the dictionary—is proved wholly right. Whether it’s making that reach or giving a passage a second or third read, Vendler always rewards with insight that rearranges what’s present and possible both in the texts she presents and our own mentation.

A poet, writer, book critic, and farmer, Letitia Montgomery-Rodgers earned a B.A. in English from Penn State and an M.F.A. in Creative Writing and M.A. in Applied Linguistics from Old Dominion University. A finalist for the 2018 Janet B. McCabe Poetry Award and the 2018 Hal Prize, her creative work has been published in Gulf Stream, IthacaLit, Menacing Hedge, SWWIM Every Day, and Peculiar, among others. Named a 2018 Emerging Critic by the National Book Critics Circle, her critical work is published or forthcoming at The Los Angeles Review, Foreword Reviews, Orion, and The Millions. Find her talking about books and other passions on Twitter @murderopilcrows.