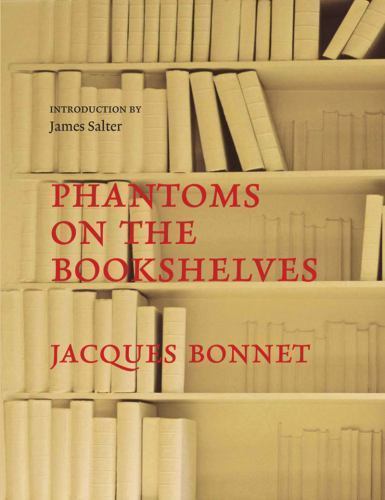 What are your favorite books about books? Why are these books such a ferocious pleasure? Maybe it's their range: books on books can combine memoir and criticism (see Rebecca Mead's My Life in Middlemarch or Janet Malcolm's Reading Chekhov), history and sociology (Alberto Manguel's A History of Reading), humor, travelogue, astute observation, and who knows what else (Elif Batuman's The Possessed). Tell us about your favorite for the latest installment of the NBCC Reads series, which draws upon the bookish passions of NBCC members and honorees  and is curated by Alan Cheuse Emerging Critic Natalia Holtzman. (The series dates back to 2007; you can explore the archive here.) Submissions can be 500 words or fewer and should go to nbcccritics@gmail.com.

The titular phantoms probably aren’t what you think. The French writer Jacques Bonnet explains, in his 2012 book of essays Phantoms on the Bookshelves, that a fantôm is a “sheet or card inserted to mark the place of a book removed from a library shelf, or a document which has been borrowed.”  This information is found in a chapter dedicated to the dismantling of libraries, a subject the author takes very seriously. Not surprising, as he owns some 40,000 books.

What is surprising is that Bonnet, by his own account, doesn’t consider himself a collector.  He identifies primarily as a reader and, outside of the number of books it contains, views his library as neither special or valuable.  In fact, he strives towards the exact opposite:

“… a monstrous personal library of several tens of thousands of books – not one of those bibliophile libraries containing works so valuable that their owner never opens them for fear of damaging them, no, I’m talking about a working library, the kind where you don’t hesitate to write on your books, or read them in the bath; a library that results from keeping everything you have ever read – including paperbacks and perhaps several editions of the same title – as well as the ones you mean to read one day.  A non-specialist library, or rather one specialized in so many areas that it becomes a general one.”

Jacques Bonnet is a beacon among the carrels.

And Phantoms on the Bookshelves is a petit trésor that I would recommend to anyone obsessed with the physical object which is a book.  This elegant translation, written in a conversational style, discusses in depth the minutia of owning, caring for and housing (never over the bed!) a personal library.  Bonnet peppers his own experiences with stories about literary and historical figures who share his compulsion.  He explores the quirks and issues which only the book-obsessed bond over with equal parts practicality and wit.

My favorite chapter is called, with refreshing directness, “Organizing the Bookshelves” and contains a funny excerpt from Carlos Maria Dominguez’s novel The Paper House. The main character, Carlos Bauer’s, refuses to place two authors together on one shelf who have quarreled in real life. And so, ‘…It was unthinkable to put a book by Borges next to one by García Lorca, whom the Argentine writer once described as “a professional Andalusian”.’

But the fun doesn’t stop at organizing!  Once you’ve shelved the books a whole new area opens up like a new level in some strange literary video game — cataloging. So prepare yourself for nine delightful chapters on topics ranging from the internet, the act of reading, the accumulation of books and “Reading Pictures.” At the end is a bibliography of all the titles mentioned and at the beginning is an introduction by James Salter, who also is the translator.  Jacques Bonnet has something here to suit every bibliophile’s taste, regardless of whether you write in the margins or not. (See chapter four.)

Tara Cheesman is a freelance book critic, National Book Critics Circle member & 2018-2019 Best Translated Book Award Fiction Judge. Her work has appeared in The Los Angeles Review of Books, The Quarterly Conversation, Book Riot, Vol. 1 Brooklyn, and other online publications. She received her Bachelor's of Fine Arts from the School of Visual Arts in New York City. You can follow her on Twitter @booksexyreview and Instagram @taracheesman .