The John Leonard Prize, our annual award based on member nominations and chosen by a panel of member volunteers, is awarded for the best first book in any genre. In advance of the announcement, we're inviting members to contribute appreciations of titles under consideration. (If you're interested in doing so, please email nbcccritics@gmail.com with the subject line Leonard.) Below, NBCC board member and autobiography chairman Laurie Hertzel writes on A.J. Pearce's debut novel, “Dear Mrs. Bird.” (Scribner.) This review originally ran in the Minneapolis Star Tribune. 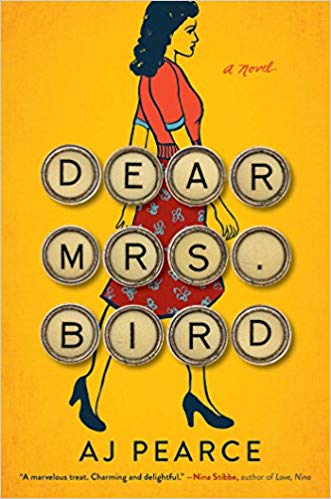 As we all know from watching PBS, London during the Blitz was populated with feisty, plucky, stiff-upper-lip types – primarily women – who carried on stoically with little regard for the dogfights taking place above their heads or the bombs exploding at their feet.

Emmeline Lake was right there with them. Emmy, the narrator of A.J. Pearce's engaging debut novel, “Dear Mrs. Bird,” rooms with her best friend, Bunty, in 1940 London. She works nights as a volunteer fire dispatcher and has just taken a day job as a junior typist at a women's magazine – not the job she had hoped for, but no matter. Stiff upper lip, you know. Carry on, old girl. (She tells herself such things often, using delightfully dated phrases such as “cock-a-hoop” and “an absolute tonic,” and employing Random Capital Letters to highlight the importance or irony of one thing or another.)

Emmy's new boss is Mrs. Bird, a formidable woman who writes the magazine's advice column, answering letters from readers – but only select letters. Nothing racy. Nothing even interesting. Nothing about real life during wartime, or, God forbid, about love, marriage or relationships. These topics, Mrs. Bird maintains, are inappropriate. She prefers to answer questions about hairdos and knitting and the proper filling for sandwiches. It is Emmy's job to cull the inappropriate letters from the morning mail, cut them up and throw them away.

But Emmy recognizes both courage and loneliness in these letters, and she begins to tuck them away in her desk drawer. “I could see people were ever so frank when they wrote in, which I thought really quite brave,” she says. “Some of them sounded in a real fix. … Things were difficult for everyone at the moment, and I did think it was poor of Mrs. Bird not to write back.”

Just as with “Major Pettigrew's Last Stand,” which took on racism and change in a quaint English village, or the novels of Rachel Joyce, there is more to this very English novel than first meets the eye. After Emmy and Bunty have a devastating falling-out, Emmy begins questioning the wisdom of stoicism and silence in the face of suffering.

“The papers and radio and even magazines like ours went on about pluck and bravery and spirit,” she says. “How often did anyone ever tell women they were doing a good job? That they didn't have to be made of steel all the time? That it was all right to feel a bit down?”

The letter writers were among the few who had the courage to seek help, Emmy figures, and they deserved to be listened to. She smuggles the inappropriate letters home with her, and begins to write back.

“Dear Mrs. Bird” is a delightful read – funny and poignant, yet with horrific descriptions of bombed-out London. It is about the home front during war, yes, but even more it is about the strength of women, the importance of friendship and the toll of stoicism.

In answering these letters, even though she knows she might eventually be caught, Emmy makes a plucky decision to fight the silence, talk about the suffering, reach out to help. You know, to be a good friend.