The John Leonard Prize, our annual award based on member nominations and chosen by a panel of member volunteers, is awarded for the best first book in any genre. In advance of the announcement, we're inviting members to contribute appreciations of titles under consideration. (If you're interested in doing so, please email nbcccritics@gmail.com with the subject line Leonard.) Below, in this excerpt from the Los Angeles Review of Books, NBCC board member Lori Feathers writes on Lisa Halliday's “Asymmetry” (Simon & Schuster). 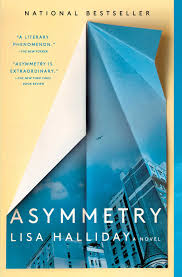 Lisa Halliday's debut, “Asymmetry,” is not a mystery novel, at least not in the way that we typically think about that genre. But there is most certainly a mystery at the novel’s core, one that arises from the book’s structure — two seemingly unrelated novellas appended by a short coda — rather than its plot. “Folly,” the first of the pair, centers on the romance between Ezra, a famous novelist in his 70s, and Alice, a twentysomething aspiring writer. The second, “Madness,” features Amar, an Iraqi American raised and living in New York City, as he reflects on the ways that his life has diverged from that of his older brother Sami, a Georgetown-educated doctor who has made his life in Iraq. These disparate narratives, each featuring a discrete cast of characters, invite readers to question whether there is a thread that connects the two novellas — and if so, what it might be? These questions will keep all but the most perceptive readers wondering until the novel’s final pages.

Less mysterious are the patent asymmetries between the novel’s actors — imbalances of age, worldview, values, and experience, which create persistent internal conflicts and affect how the characters view one another and themselves. Amar’s story opens with his detention at Heathrow Airport en route to join his family in Iraq. During his long wait and questioning by immigration officials, Amar recollects his childhood in New York with his parents and Sami, his previous family visits to Iraq, and past times spent with his estranged American girlfriend, Maddie.

Lori's complete review can be found at The Los Angeles Review of Books.