In the 30 Books in 30 Days series leading up to the March 15, 2018 announcement of the 2017 National Book Critics Circle award winners, NBCC board members review the thirty finalists.Today, NBCC board member Walton Muyumba offers an appreciation of criticism finalist Carina Chocano’s 'You Play the Girl' ( Mariner). 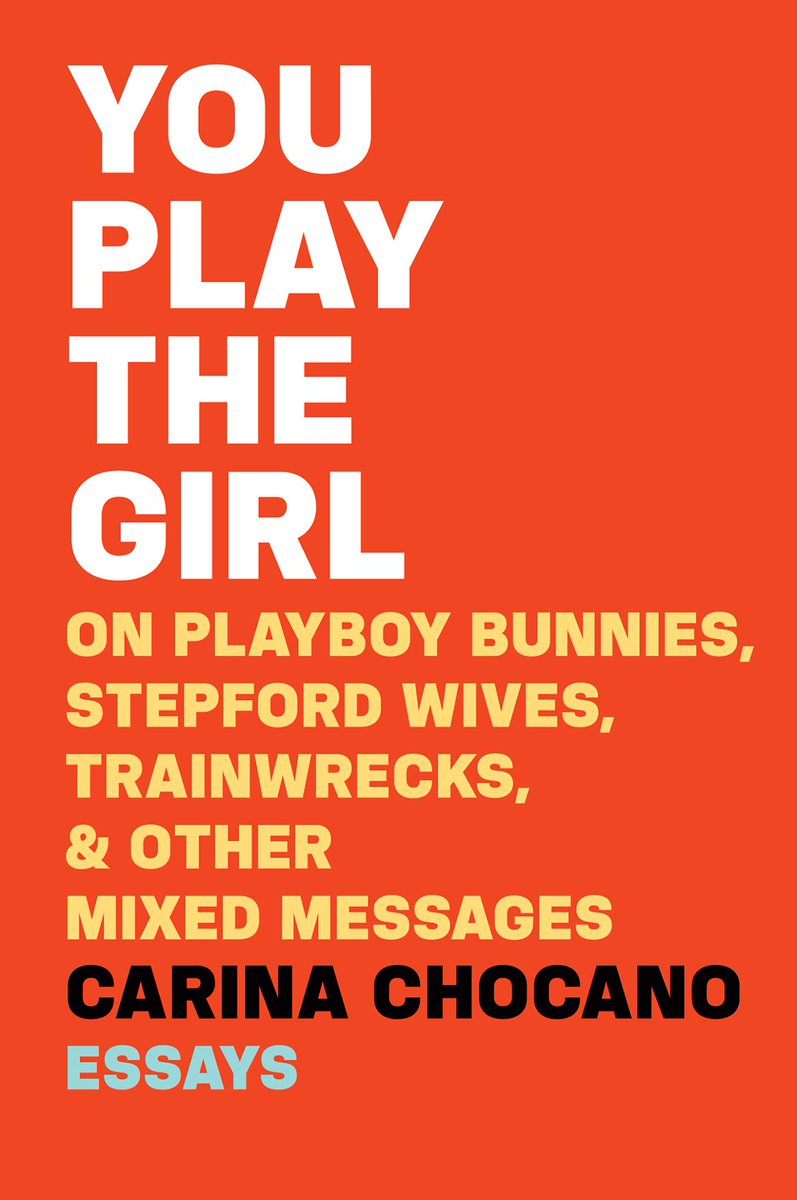 'You Play the Girl: On Playboy Bunnies, Stepford Wives, Train Wrecks & Other Mixed Message's is Carina Chocano’s guided tour of America’s pop culture wonderland.  In brilliant disquisitions on movies like Flashdance and Pretty Women, and the reality show, The Bachelor, Chocano illustrates that “the girl” in her title is “the adult version of ‘the princess’” from Disney mythologies like Frozen and Snow White and the Seven Dwarfs.

Chronicling the “toxic doses” of unreality she’s consumed as a movie and television critic, Chocano imagines herself not “the girl” but as a kind of Alice in Wonderland: “She never believed in fairy tales when she was younger, and yet here she is, seemingly trapped in one.  Someone should write a book about her, she thinks.  Perhaps she’ll write it herself when she grows up.  Then it occurs to her that she is grown up — or as grown up as she’s going to be allowed to get in this limiting, infantilizing place, where there’s no room for a person like her to grow up in.”

We seem to tell ourselves movie and tv stories, Chocano suggests, in order to perpetuate old lies about gender, generally, and women, specifically.  In fact, we seem to find deep pleasure in their continuous repetition.  In twenty-one essays of tv, film, and cultural criticism, Chocano doesn’t send readers down the rabbit hole (we’re living in Wonderland already) so much as she uses these pieces like smelling salts to awaken us to our collective gaslighting.

Chocano, like many of us, believes she understands how the sexist patriarchal matrix entraps us, turns us into Stepford robots.  However, claiming enlightenment in this case, she points out, is really a pose of “cynical awareness.” “We see the gap between reality and the distorted representation of reality,” Chocano writes, “and we understand it’s lying to us.  We don’t renounce it, we just note that we are noting it.  We mock it.”

Chocano’s takes, for example, on Charlie’s Angels, Eat Pray Love, The Real Housewives and Desperate Housewives, men who love robot sex dolls, and women who claim “choice” but don’t really have any, are attempts at shaking off cynicism.  She’s developed an intellectual attitude that allows her to analyze simultaneously “the girls” propped up across pop culture who are “lifelike rather than alive,” her own responses to those representations, and her own messy, complex lived experience.  And throughout, Chocano’s tart wit enlivens her critical acuity. “Big Mouth Strikes Again” — a piece about Knocked Up, female critics, and the danger and necessity of truth-telling public critique — is a masterful performance of this critical practice.

'You Play the Girl' is underwritten by Chocano’s notion that “there isn’t a girl in the world who has not, at some point, come across an image or portrayal that made her feel a sense of recognition and alienation at the same time.”  These essays also explain, albeit surreptitiously, that men dehumanize themselves in their desire for, construction and dissemination of negative misrepresentations of women.

In “Look at Yourself,” her wise essay about Joan and Peggy, Mad Men’s most profound characters, Chocano riffs daringly on Don Draper’s secret identity: “[He] was a girl, too . . . He knew that transforming oneself into a strict category prototype, into the platonic ideal of a happy housewife, a Playboy mad-man-about-town, a bombshell, or a single career girl in the big city, was not only impossible but undesirable, inhuman: that it was to turn yourself into a robot.”

Chocano’s criticism speaks to the zeitgeist, yes, but it also tells us how we’ve failed ourselves in the past and who we might become once we turn away from “the girl” and “the princess” and follow “the heroine” instead: “The heroine’s journey is circular.  It moves forward in spirals and burrows inward, to understanding.  It can be undertaken by anyone, male or female, who is ready to move past the illusion of a perfect world and a straight shot to selfhood.  The path is treacherous.  The territory is hostile.  But the heroine is brave.”