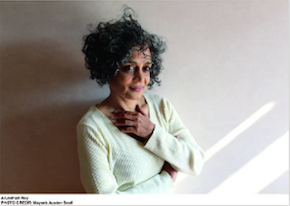 NBCC board member Mary Ann Gwinn interviews Sherman Alexie for The Seattle Times about his new memoir, “You Don’t Have to Say You Love Me.”

NBCC board member Anjali Enjeti reviews Scott Gould’s “Strangers to Temptation” for the Atlanta Journal Constitution, and Arundhati Roy’s “The Ministry of Utmost Happiness” and Camille T. Dungy’s “Guidebook to Relative Strangers: Journeys into Race, Motherhood, and History” for the Star Tribune.

Carol Iacofano reviews Joseph Finder's “The Switch,” Scott Turow's “Testimony” and Ben Coes' “Trap the Devil” for WBUR, as well as Elizabeth Strout's “Anything is Possible” for WBUR.

Lanie Tankard reviews “The Tower of the Antilles” by Achy Obejas for The Woven Tale Press.

Laverne Frith reviews  Charles Simic's “Scribbled in the Dark” for the New York Journal of Books.

Dianne Scharper reviews “All the Rivers” by Dorit Rabinyan for The Weekly Standard.

Maureen Corrigan reviews Maile Meloy’s “Do Not Be Alarmed” for NPR.

For The Millions, David Nilsen reviews “Priestdaddy” by Patricia Lockwood.

Meg Waite Clayton reviews “Caught in the Revolution: Petrograd, Russia, 1917 – A World on the Edge,” by Helen Rapport for the San Francisco Chronicle.

And in other exciting booknews:

Author of the NBCC-award winning “The Lost,” Daniel Mendelsohn, has a forthcoming memoir, “An Odyssey: A Father, a Son, and an Epic” that will be published in September.

Critic Maureen Corrigan was the featured critic in Ploughshares, “The Readers Series.”

Anjali Enjeti is a freelance critic, essayist and journalist. Her work has appeared in the Atlanta Journal Constitution, the Star Tribune, Vice, NPR, NBC, The Guardian, Washington Post, the New York Times, and elsewhere. She lives near Atlanta, teaches creative writing in the MFA program at Reinhardt University, and can be found on Twitter @anjalienjeti.