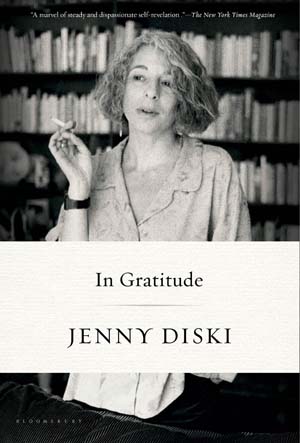 In the 30 Books in 30 Days series leading up to the March 16 announcement of the 2016 National Book Critics Circle award winners, NBCC board members review the thirty finalists. Today, NBCC board member Tom Beer offers an appreciation of autobiography finalist Jenny Diski’s In Gratitude (Bloomsbury).

Within hours of being diagnosed with inoperable lung cancer in July of 2014, Jenny Diski announced, almost wearily: “Well, I suppose I’m going to write a cancer diary.” That skeptical note—“I suppose”— is pure Diski. As she observes in the opening pages of In Gratitude, the bracing memoir fashioned from her columns in the London Review of Books, “Isn’t the cliché of writing a cancer diary going to be compounded by the impossibility of writing in it anything other than what has already been written, over and over? Same story, same ending.” Well, in the hands of this sharply intelligent and quick-witted English writer, the author of  Stranger on a Train, Skating to Antarctica, and other titles—the cancer diary becomes not just a grim march of treatment successes and failures, but a penetrating examination of the author’s present and past, written over the course of her last two years. (Diski died in April of 2016, at the age of 68.)

She begins by cracking a joke in the office of the oncologist— her “Onc Doc”—after the fateful news is delivered. “So—we’d better get cooking the meth,” Diski says to “the Poet” (husband Ian Patterson), a Breaking Bad reference that leaves the doctor and nurse stone-faced. (Did they simply not get it, Diski worries, or had she already resorted to a platitude, the “Contemporary International Smart Cancer Joke”?) She turns the cancer clichés over and over in her mind, resisting them while acknowledging that they are sometimes inevitable—and yet must be resisted just the same. The notion—dreadful to her— of “being on a journey.” Or that she must start a campaign and “dance the tango for a very long time, in return for money for cancer research.” And: “Under no circumstances is anyone to say that I lost a battle with cancer. Or that I bore it bravely. I am not fighting, losing, winning or bearing.”

But the experience of cancer is but one part of this cancer diary. The other is Diski’s untangling of her relationship with Doris Lessing, the Nobel Prize-winning author of The Golden Notebook and many other books, who in the early 1960s invited Diski, then a classmate of Lessing’s son, to live with them. Diski’s own parents had proven woefully unfit, and after being sent to a psychiatric hospital and expelled from school, Diski went to live with Lessing at her house in Kings Cross, London. Lessing is given an almost novelistic depth of character here: imperious, prickly, inclined to grand altruistic gestures but uncertain how to deal with a real teenage girl. (She made Diski a character in two of her novels, Memoirs of a Survivor and Briefing for a Descent Into Hell.) The two inevitably clash and fall apart, but even after Lessing’s death, Diski is still trying to ascertain the exact nature of their relationship and of her debt to this older woman, neither foster mother, savior, nor friend. Which brings us to that sly title, In Gratitude, dangerously close to ingratitude. Again, pure Diski.

Though Diski wrote 17 books, including fiction, nonfiction and memoir, she notes that all her work is, to some degree or another, autobiographical.   “I can’t use my eyes to see things,” she writes, “without my eyes knowing that what they see is conditioned by what I’ve known and what I’ve been. Ditto my mind to think things.” The 60-something woman going through chemotherapy is conditioned by the troubled teen who grappled with that famous author. Diski’s eyes and mind are given a full workout here, her searching and unflinchingly honest final book.

Tom Beer is the books editor at Newsday, and a former editor at Out magazine. He can be found on Twitter @TomBeerBooks. He was elected president of the NBCC board in 2015; his term on the board ends in 2019.