Thanks to the cooperation of the NBCC and Creative Writing at The New School, as well as the tireless efforts of their students and faculty, we are able to provide interviews with each of the NBCC Awards Finalists for the publishing year 2015.

Ruwa Alhayek, on behalf of Creative Writing at The New School and the NBCC, interviewed Charlotte Gordon about her book Romantic Outlaws: The Extraordinary Lives of Mary Wollstonecraft and Her Daughter Mary Shelley (Random House), which is among the final five selections in the category of Biography for the 2015 NBCC Awards.

Ruwa Alhayek: In your book you point to William Godwin as a positive influence in his daughter’s life, despite his relative absence, and particularly in terms of the attention he paid her relative to his other daughters/stepdaughters, and also in terms of the people and books he exposed her to. When I was doing my undergraduate thesis I came upon an article by Carolyn Barnet where she talks about the importance of paternal influence in patriarchal societies as agents of political socialization. Can you speak to that?

Charlotte Gordon: Yes, and it sounds like you understand that it is super complicated. When you’re addressing issues like this, you’re addressing a situation where patriarchy is holding women back, and yet it is at the same time, going to be one of the agents of that patriarchy that helps educate and empower some of the women inside of it., and what an interesting and complicated situation that is! But [in the case of Mary Shelley] I would certainly say Godwin was both a positive and empowering force, [but at the same time] a super destructive one. Not binary at all.

Samantha N. Kirby, on behalf of Creative Writing at The New School and the NBCC, interviewed T.J. Stiles about his book Custer’s Trials: A Life on the Frontier of a New America (A. A. Knopf), which is among the final five selections in the category of Biography for the 2015 NBCC Awards.

Samantha N. Kirby: Why do you think people read biographies? Is there, in your mind, a bias in American readership towards reading biographies over reading fiction or poetry?

T.J. Stiles: I think at the most basic level that question can be answered with sales figures. It’s no secret that what we often call serious or literary fiction has a hard time in the marketplace. I know most people who try to write it struggle to get noticed. For example, when I won the National Book Award for Nonfiction, it definitely helped sales of my book. Colum McCann won the National Book Award for Fiction the same day, and I’m under the impression the prize was a much bigger boost for his book, Let the Great World Spin, even though Colum was already a highly regarded novelist and the book is incredible. Unfortunately it often takes a major prize like that to get people’s attention when it comes to fiction. That’s one reason why awards are helpful, but it’s a shame so many novels and short-story collections that deserve to be bestsellers go largely unnoticed. 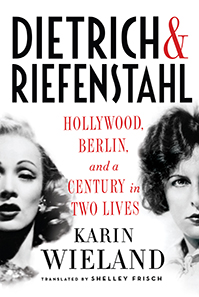 Dina Lee, on behalf of Creative Writing at The New School and the NBCC, interviewed Karin Wieland about her book Dietrich and Riefenstahl: Hollywood, Berlin, and a Century in Two Lives (W.W. Norton & Co.), translated by Shelley Frisch, which is among the final five selections in the category of Biography for the 2015 NBCC Awards.

Interview questions and answers were translated by Shelley Frisch.

Dina Lee: Riefenstahl and Dietrich's lives barely intersected. When starting your book, did you know you would be concentrating on these two women? Or did this idea come more organically during your research?

Karin Wieland: I first delved into the subject of Marlene Dietrich and Leni Riefenstahl as a young feminist back in the 1980s, intrigued by these two women who were both modern artists and political symbols, one the seeming quintessence of Good and the other the incarnation of Evil. A comparison of the lives and works of Dietrich and Riefenstahl struck me as a natural route of entry to explore the advancement of women in the 20th-century world of art: The two of them shared a city and time of birth and childhood, the performing arts as their domain, and a century whose aesthetic they helped shape. Their lives and works have a paradigmatic character in the aesthetic and political sphere. Leni Riefenstahl embodied the artist who devoted her service to a totalitarian system, and Marlene Dietrich the upstanding democrat and anti-fascist. They led parallel lives in an age of extremes.

Phil Yakushev, on behalf of Creative Writing at The New School and the NBCC, interviewed Rosemary Sullivan about her book Stalin’s Daughter: The Extraordinary and Tumultuous Life of Svetlana Alliluyeva (HarperCollins), which is among the final five selections in the category of Biography for the 2015 NBCC Awards.

Phil Yakushev: In one of the last lines of the prologue to Stalin’s Daughter, you describe Svetlana as “always living in the shadow” of her father. I was struck by how deep into that shadow this book managed to get. Particularly in Part I, when Stalin is still alive and at the height of his power—both politically and personally, as a father to a lonely child—his actions are described almost as much as Svetlana’s. And even when he’s off-stage, his shadow manages to seep into Svetlana’s life and influence it at every turn. Did you find it difficult to be that close and personal to the darkness of that era? How did you balance such a close perspective with a broader need for historical objectivity and justice? Did Svetlana’s presence at the structural center of the narrative make that task easier or harder?

Rosemary Sullivan: You have identified the most difficult challenge in writing this book: how to foreground Svetlana’s life and not have it subsumed and overwhelmed by the political violence, what you call “the darkness of the era.” I had to figure out how to give just enough of the backdrop so that even those unfamiliar with Stalin’s world could follow the narrative, but she had to be the focus. I scrapped my first draft of 100 pages because it read like a biography of Stalin.

We know the “darkness of the era” from reading Solzhenitsyn, N. Mandelstam, Ginzburg, Grossman, Victor Serge, etc. But I had the opportunity to write about that darkness from within Stalin’s very family, from his daughter’s perspective. As long as I was looking for her story, I could keep the focus.