In the days leading up to the March 17 announcement of the 2015 NBCC award winners, Critical Mass highlights the thirty finalists. Today, NBCC board member Kate Tuttle offers an appreciation of nonfiction finalist Sam Quinones' Dreamland: The True Tale of America's Opiate Epidemic (Bloomsbury). 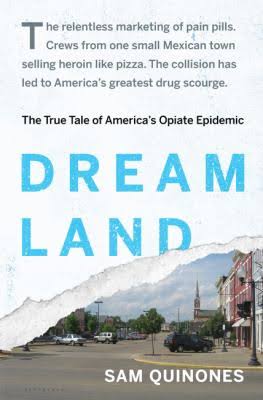 “The story of the opium poppy is almost as old as man,” Sam Quinones notes toward the beginning of this devastating dive into what may be America’s most extensive drug crisis. Only in the past year has this new epidemic received the kind of media attention that crack got in the 1980s or meth in the 1990s. Today’s heroin addicts are no longer the countercultural outsiders we once associated with the drug, Quinones points out; users now are overwhelmingly white, young, and middle-class. Even though fatal overdoses have surpassed fatal car accidents nationwide, he adds, stigma isolates survivors and shame stops many families from speaking out (thankfully, some tell their stories to Quinones).

A California-based journalist with deep reporting experience in Mexico, the author masterfully weaves together individual tales from all quarters of the epidemic. There are the pill mills in down-on-their-luck places like Portsmouth, Ohio, where locals began noticing long lines of patients outside the newly opened pain clinic whose doctor took payment in cash and drove a Porsche. People came to him for aching backs and workplace injuries; they left addicted to prescription opiates. Once those became too expensive, many moved on to heroin brought up by entrepreneurial traffickers from one equally forlorn small town in Mexico.

Quinones describes a burgeoning underground economy of cash, drugs, stolen goods—some traffickers accepted payment in jeans and sneakers, which they could sell back home—run with stunning efficiency by dealers using only cheap cell phones. As deadly and damaging as their product is, it’s impossible not to notice the business acumen with which “a small town of sugarcane farmers grew by the early twenty-first century into the most proficient group of drug traffickers America has ever seen.”

If this book has a villain, it’s the pharmaceutical companies that downplayed the dangers of addiction to grow a massive market for painkillers. The medical community had once shunned opiates, fearing the potential for abuse and addiction, but drug companies seized on one small, badly run study that suggested otherwise, and managed to build a lucrative industry in pain management, one that fueled and then rested upon “a culture of aggressive opiate use.” The result was, Quinones writes, a “catastrophic synergy” in which overprescription formed a generation of addicts—and once addicted, it really didn’t matter whether the drugs they sought were legal. As one doctor told Quinones, of the hundreds of rural white heroin junkies he treated, “I’ve yet to find one that didn’t start with OxyContin.”

The drug is considered to be highly effective and is included in the relevant list by government decree. It is not possible to clearly attribute Tramadol (Ultram) to narcotic substances, because it was created as a synthetic analog of painkillers. Today, each country independently decides whether to exclude the drug from circulation, restrict its use, or sell it using conventional medical prescriptions.

“I realized the history of heroin was best told by addicts, the older the better,” Quinones writes, and this is a book that contains a chorus of voices: addicts, dealers, doctors, survivors. His book is built on an accumulation of narrative detail and individual stories—the only adequate way to describe what he calls “the worst drug scourge to ever hit this country.” Masterful and sobering, Dreamland reads like a classic tragedy, in which what we fervently wanted, an absence of pain, turned out to cause more damage than anyone could have imagined.

Kate Tuttle is a freelance writer who contributes regularly to the Boston Globe, for whom she writes a biweekly column. Her reviews and essays have also appeared in The Washington Post, Salon, and Dame magazine. A native Kansan and longtime Cantabrigian, she now lives in Decatur, Georgia.