This is the nineteenth in Critical Mass's new Second Thoughts series, curated by Daniel Akst. More about this series, and how to submit, here. 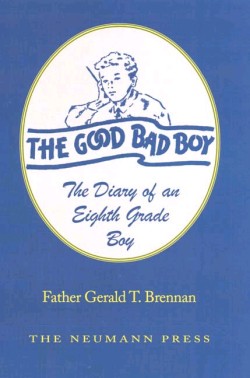 Growing up, I knew three things about my mother’s younger brother, my Uncle Mark:

1. He was a total badass, a New Jersey State Trooper our family nicknamed “Bear”;

2. He was my godfather, and in that capacity was entitled to crush my hand like a soft-shell crab whenever he greeted me at family get-togethers; and

3. He was no longer a Roman Catholic.

Item #3 struck me as the most interesting. Mark Little’s ex-Catholic status was often mentioned, but never explained. Other than my father’s agnosticism, no one in the family led a life outside the Catholic Church. Uncle Mark, defender of the Garden State Parkway, possessor of pistol and shotgun, source of my family’s pride, owner of a house near the Jersey Pines, was kind of a wildman prankster. Whenever someone called him a “dickhead” for issuing a speeding ticket, Uncle Mark would produce a laminated entry from his high school yearbook of a classmate named Richard E. Head.

More than once, Mark saw my grandmother driving through my hometown of Maple Shade, N.J., fired up the sirens, and pulled her over. He did this once to one my aunt’s boyfriends, letting him off with a warning. Weeks later, the suitor would see the same trooper sitting in my grandparents’ living room, watching a Phillies game. My uncle was a good bad boy.

I dug up an old hardbound book with a gold-embossed cover and deckle-edged sides. Inscribed on the inside cover in a boy’s hand: “The book belongs to Mark Little, 1961.” Published by The Neumann Press in 1949, Father Gerald Brennan’s The Good Bad Boy: The Diary of an Eighth-Grade Boy tells the story of Pompey Briggs as he enters eighth grade at Holy Cross School.

“Great men always keep diaries,” Briggs writes. “Perhaps, that’s what makes them great. If I keep a diary, I, too, may become great. Who knows?”

The Good Bad Boy had me at its oxymoronic title. How can a bad boy be good, or a good boy bad? This contradiction blew my mind. I didn’t know which of these boys I wanted to be yet, though I leaned toward the bad one who could be good when he wanted to. That The Good Bad Boy was written by a priest—a pastor of Our Lady of Mount Carmel Parish in Rochester, N.Y.—gave the book Catholic street cred.

To say I related to Pompey Briggs understates things. For the months I read and reread it, I was the very embodiment of the Good Bad Boy, or at least aspired to be. Yankee fan and founding president of his club, the Beaver Chiefs, Pompey was the star scorer of his school’s basketball team (also named the Beaver Chiefs), whereas I claimed membership in no club and warmed the bench for the Our Lady of Perpetual Help Fighting Irish. Pompey’s job at Conlan’s Grocery seems to be that of a floater, whereas my duties helping our parish janitor included mopping up second graders’ puke and sweeping up bingo chips in the church basement. Pompey was a ladies’ man, fielding the affections of girls with names like Jean Wallace and Virginia Drake, whereas I repelled all classmates, female and male alike, with sweat-marked yellow uniform shirts and transition lens glasses that never quite turned clear indoors and made me look like Mark David Chapman with a clip-on plaid tie.

I added The Good Bad Boy to my bookshelf around the same time I was prevented (forbidden?) from ordering The Catcher in the Rye from the Scholastic Books catalog. One of the nuns told me it was “too adult,” that I “wasn’t ready for it yet,” which made me want to read the book more. For a few months, Pompey Briggs did a fine job a Holden Caulfield stand-in.

I just rattled off all those details, but the truth is I had forgotten just about everything about The Good Bad Boy, other than it was a book that I obsessed over for a short time. I decided to re-read it while doing research for Shader, a coming-of-age memoir.

My uncle's copy was lost in a move, and so I ordered a facsimile edition of The Good Bad Boy from an online Catholic bookseller. It was freaky to hold a brand new copy all these years later and to read Pompey's story not as a 12-year-old altar boy who prayed every night at bedtime, but as a middle-aged godless writer looking for clues into his childhood.

Re-reading Father Brennan’s book some 30 years later, I can’t help but think he might have had some problem with women. “You can certainly enjoy your dinner when you know you don’t have to wash the dishes,” Pompey writes on September 11. “All dishes should be washed by women.” Later, when a writing teacher visits the class and sits next to him as they write exercises, Pompey is aghast. “With thirty-six pupils in the room, why did she have to sit with me? Some women don’t know their place.”

Pomp was a bad boy. He got in trouble for smoking. He and his friends painted a skull and crossbones on a boy’s stomach and fed him castor oil. A mother caught them doing it and the group of good bad boys was punished. If this happened today, the incident might make a local newscast.

I say that I had forgotten about The Good Bad Boy, but the book did make one more appearance in the intervening years, when I was in college. When I had the job of shelving books at night at Rutgers in Camden, NJ, I would pick up any book that had the words “sex” or “death” in it. That’s how I picked up Love and Death in the American Novel, Leslie Fiedler’s classic 1960 study. I think I was just skimming, looking for the dirty parts, when Fiedler mentions the “Good Bad Boy,” which he defines as “America’s vision of itself, crude and unruly in his beginnings, but endowed by his creator with an instinctive sense of what is right. Sexually as pure as any milky maiden, he is a roughneck all the same, at once potent and submissive, made to be reformed by the right woman.” American fiction’s “fear of sex, a strange blindness to the daily manifestations of sex, or the attenuation of sexuality itself,” Fiedler wrote, “drove the American novel back over the lintel of puberty in the declining years of the nineteenth century.”

The memory of good old Pompey Briggs returned, taking me back to a time when I first envisioned myself as a scamp but not a reprobate, an anti-hero willing to be converted if the cause was just and the time was right. By the time I was a college student, I was no longer Catholic, and no longer revered anything. Nothing could save me, I thought. I re-fashioned myself as a bad boy in the style of the Beats and punk rockers, complete with biker jacket, Doc Marten boots, and those wire-rimmed glasses that curl behind your ears. It never crossed my mind that perhaps Fiedler had read Father Brennan’s book, a short little thing—I think we critics today would call it a “young adult bagatelle”—but it’s possible. Pompey Briggs would have fit right in with Fiedler’s idea of the Beaver Cleavers and Dennis the Menaces, who grew more false in their naiveté—in contrast to the pure skepticism of the Good Bad Boy.

I always wondered why my Uncle Mark left the church. Was it as simple as marrying someone who was a Protestant? The real reason, he told me at a family party after several Coors Lites, was that he felt guilty all the time.

“I would play with myself and run right to church to go to confession,” he said. He did this every day, he said. “Even the priest told me I shouldn’t be so hard on myself.” When, after Trooper Academy, he met my Aunt Jody, a Protestant of some indeterminate variety, he left the house and the church and never looked back.

His story did not seem strange to me by the time he told it to me. I had felt guilt’s power as long as I could remember. I used to break down the different kinds of guilt I had. Somewhere along the line, I realized that guilt was as mundane and repetitive as it was universal, that it resists real meaning. For a Catholic boy, it’s a bodily reaction, like fight-or-flight or blinking or swallowing. Guilt sank in my chest somewhere when I was around eight years old and has stayed there. There are times it feels as if guilt had left my body, and my mood remained defined by what was not there, like a transposed original, the way I spread Silly Putty on funny pages and pulled up a reverse image. It’s silly to blame a dozen-plus years of Catholic school for all this, but Pompey confirmed to me the cycle of wonder, then sin, then penance, then wonder again.

Pompey Briggs did inspire me to write every day. I wrote out entries on an Acme paper pad and put the completed sheets back into a cigar box. My journal, as I insisted on calling it—not a “diary,” which I regarded as girly and insubstantial—reflected Pompey’s solemnity.

“You must be prepared for the Test of Life,” I write in my first entry on December 21, 1981. “Are you making Progress? Or are you falling into the bottomless pit of Failure, an infinite void where so many of us have forced us [sic] to fall into?”

Each night I curled my biceps into meatball-shaped bulbs, sat on my knees against the bed, and prayed. I wrote promises to myself: “I shall be a scholar and write a monumental work to be praised hundreds of years to come.”

The man can’t go back and tell the boy to lighten up, to scale down his dreams a bit. Still, I can’t help but root for this potent and submissive kid who yearned to write monumental works. I still like to think of myself as a good bad boy, someone who began wanting to do good, but feels he’s bad, sinful, damaged. A lot of us are like that, and I’m one.

It’s hard to reconcile this version of myself with the one who cupped his hands to make fart noises in class. Even then, it seems, I felt the need to present a different version of myself on the page than in real life.

Daniel Nester is the author of Shader: 99 Notes on Car Washes, Making Out in Church, Grief, and Other Unlearnable Subjects (99: The Press 2015). He teaches writing at the College of Saint Rose in Albany, N.Y. Follow him on Twitter at @danielnester.