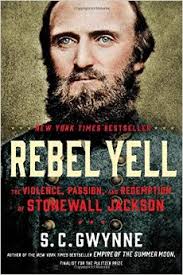 One mark of a great biography is a book that helps you comprehend someone who might be entirely different from you, the reader. The biographical subject might be confounding. Unlikeable. Infuriating. In short, someone who dances to an entirely different tune. Such is the case with the subject of S.C. Gwynne’s enthralling new biography – Confederate general Thomas J. “Stonewall” Jackson.

Today, Stonewall Jackson might be considered an inflexible martinet at best, a religious zealot at worst. But the bottom line, as beautifully presented in “Rebel Yell: The Violence, Passion and Redemption of Stonewall Jackson” (Scribner, 688 pages, $35), is that Jackson’s dogged fighting style, leadership qualities and absolute moral conviction kept the southern Cause alive, perhaps years beyond its logical expiration date.

His troops – in rags, starving, and shoeless – would have marched into the mouth of hell for Stonewall Jackson. One could make the case that they did.

Gwynne’s previous book, “Empire of the Summer Moon,” the story of Comanche leader Quanah Parker, was both a Pulitzer finalist for general nonfiction, and a 2010 NBCC nonfiction finalist. He is a writer with a gift for weaving the threads of history into a blazing narrative, and he has rich material in the contradictory makeup of Jackson, a man who no one initially considered a likely leader of Confederate troops. But in the cauldron of war, the moral certainties of Stonewall Jackson’s life fueled his transformation into a military leader of fire, charisma and daring.

At times, his rock-ribbed beliefs seemed certain to derail his career. In 1851, young Brevet Major Jackson launched a crusade against his commanding officer at a remote post in Florida by accusing William H. French of adultery with a household servant. When the company surgeon “begged him to withdraw his accusations because of the pain they would cause French’s popular and likable wife, Jackson listened to him, and his eyes filled with tears.”

“’Inflicting pain on her was agony to him,’” wrote Jackson’s brother-in-law D.H. Hill. “’But his conscience compelled him to prosecute the case.’”

Jackson somehow survived this career catastrophe, but it showcased the white-hot certainty that would drive him throughout his life. “Jackson always possessed an absolute sense of what he was required to do – a personal code that was not always convenient for those around him,” writes Gwynne. That code was underwritten by an absolute faith in God, a belief in eternal life, and the conviction that he was fighting on God’s side. Eventually he would fall out with his beloved sister, confidante and correspondent Laura – her support of the Union was intolerable to Jackson.

For a contemporary reader, it’s hardest to fathom Jackson’s rock-like belief that God was on the side of the Confederacy and its defense of slavery. He was no bigot – he ran a Sunday school for slaves that effectively taught them to read, which violated the law in his home state of Virginia. But he believed that the Union was tyrannizing the South, and he was galvanized by the Union occupation of his native Virginia.

One day a colleague, riding with Jackson, heard him suddenly say, ‘“How horrible is war.’

‘“Horrible, yes,’ McGuire replied. ‘But we have been invaded. What can we do?’

Once he decided, there was no going back for Stonewall Jackson. Derided as a lousy teacher at the Virginia Military Institute, where he taught, he became an incandescent leader of his troops, including many VMI cadets.

Much of Gwynne’s book is taken up with Jackson’s extraordinary gift for last-chance battlefield gambits, many of which pulled the fat from the fire for the Confederate cause. It is riveting reading, but it is also extraordinarily depressing  – the hardship, the carnage and the disease, and the sad waste of life. Jackson was unmoved by the daunting conditions – “Hardship, or the prospect of hardship, or fear of what was to come, had absolutely no effect on his thinking and never would,” writes Gwynne. His death on the battlefield unleashed an outpouring of grief throughout the South, and a surge of relief in the North.

What are we to make of such a man? To his men, he was a hero; to the Confederacy, he was a defining, saving myth, until his indifference to danger resulted in injury and death.

Today, he is an example of what conviction can produce – a total warrior. Gwynne’s book is scary, enlightening, and an absolutely riveting story.