In the weeks leading up to the March 12 announcement of the 2014 NBCC award winners, Critical Mass highlights the thirty finalists. Today, NBCC board member Alex Abramovich offers an appreciation of criticism finalist Ellen Willis' “The Essential Ellen Willis” (University of Minnesota Press). 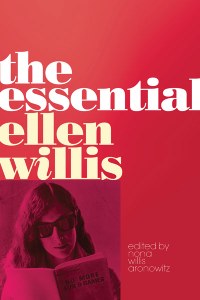 Three years ago, Ellen Willis's “Out of the Vinyl Deeps” was a finalist for the National Book Critics Circle Award in Criticism. “The Essential Ellen Willis” picks up where that collection left off, rounding out our understanding of a magnificent thinker and writer—one who, unlike most rock critics, was really much more than a rock critic. Then again, for a rock critic, Willis was never typical.

“What cultural revolutionaries do not seem to grasp,” she wrote, in 1969, “is that, far from being a grass-roots art form that has been taken over by businessmen, rock itself comes from the commercial exploitation of blues. It is bourgeois at its core, a mass-produced commodity, dependent on advanced technology and therefore on the money controlled by those in power. Its rebelliousness does not imply specific political content; it can be—and has been—criminal, fascistic, and cooly individualistic as well as revolutionary. Nor is the hip lifestyle inherently radical. It can simply be a more pleasurable way of surviving within the system, which is what the pop sensibility has always been about. Certainly that was what Woodstock was about: ignore the bad, groove on the good, hang loose, and let things happen. The truth is that there can't be a revolutionary culture until there is a revolution. In the meantime, we should at least insist that the capitalists who produce rock concerts charge reasonable prices for reasonable service.”

What a remarkably beautiful, bullshit-free passage this is! And all the more so for appearing before the mud at Woodstock had dried. But, as David Ulin wrote, on this page, in 2012, “Willis was smart enough to get out of the rock writing business when the getting was good.” What followed, over the course of four decades, were essays about feminism, radicalism, Judaism, child-rearing, AIDs, drugs, pornography, radical politics, terrorism, and Freud, among not a few other subjects—and they, too, were well-reasoned, beautifully written, and right. “The Essential” brings us right up to 2006, the year of Willis's death—one of the very last pieces is a three-pronged eulogy for Susan Sontag—and ends with selections from her final, unfinished book, which she had tentatively titled “The Cultural Unconscious in American Politics.” Edited by her daughter, Nona Willis Aronowitz, and framed with appreciations by Ann Friedman, Spencer Ackerman, and others, it presents the full sweep, in 500 pages, of Willis's well-spent, well-argued life as a critic.

More:
Read David Ulin on “Out of the Vinyl Depths” in The Rumpus, cross-posted on Critical Mass here.