In the weeks leading up to the March 12 announcement of the 2014 NBCC award winners, Critical Mass highlights the thirty finalists. Today, NBCC board member David Biespiel offers an appreciation of poetry finalist Christian Wiman's “Once in the West” (Farrar, Straus and Giroux). 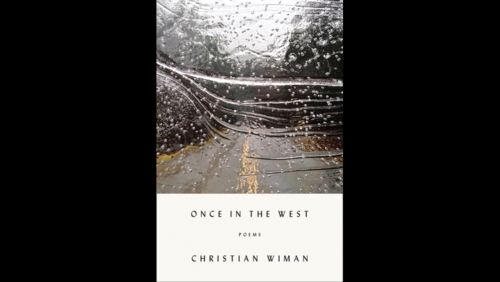 Just as Rumi says that the “wound is the place where the Light enters you,” so it is with Christian Wiman’s transcendent book of poems, Once in the West, that opens with a prayer for pain and ends in the presence of grace where “something in us touches/suffering.”
In between is the best collection of lyric poems this poet has written to date, with poems that explore trials of tenderness and Christian faith, as well as illnesses of both body and spirit. Few poets writing today address questions of living and dying with the demeanor and force of expression as Wiman does. Take the poem “Calculus,” for instance. The poem tends to the body's pain which becomes located and redeemed in the following question:

is that, then,
what we were
given
in that back-
seat, sweat-
soaked, skin-
habited heaven
of days
when rapture
was pure
beginning
and sinning
praise?

If “Calculus” characterizes the body's wounds as a source for the soul's redemption, “Music Maybe” challenges our culture's fetishized worship of grief:

Too many elegies elevating sadness
to a kind of sad religion:
one wants in the end just once to befriend
one's own loneliness,
to make of the ache of inwardness —
something,
music maybe,
or even just believing in it,
and summer,
and the long room alone
where the child
chances on a bee
banging against the glass
like an attack of happiness.

Christian Wiman published his first book of poems, The Long Home, in 1998. Once in the West is his fourth collection. It follows the publication of his celebrated 2013 book of prose, My Bright Abyss: Meditation of a Modern Believer. Read in combination, the two books comprise a defiant stance against the ruins of illness  — Wiman has been diagnosed with a rare form of cancer and has been treated with a bone marrow transplant.
Where My Bright Abyss invites readers into one believer's skeptical negotiation with the contingencies of Christ and also argues for seeking out transient moments of spiritual knowing mixed with feelings of doubt, Once in the West reveals the bitterness that can exist in, what shall I call it, the non-transformative moments where the poet makes “my scathing/way/Failingly.” Once in the West proposes that such bitterness includes how we honestly experience our psychic and physical wounds in “the suffering of primal silence” and also how feelings of bitterness might be overcome but not necessarily resolved, must be acknowledged but not succumbed to, in order to find the urgencies in living that expose you to a faithful vision of life's completeness.
And by completeness I infer from these poems, a knowledge of — in a word — love or God or Christ. And these clarities are to be known —

downward
soundward
to the lighswirled world that even in my heart
is hard.
There are eyes, there are hands
there are lives so otherlit
so freed of the need to mean
that to elegize is obscene

Such “otherlit” urgencies where the ghostlike soul exists — and I understand Wiman here to mean that one might have to nearly figuratively more than literally “die to find” the soul — can also be found in both erotic and platonic love and in the freedom and hope and play and unconditional love of and for children.  In Wiman's case, it's his two daughters who appear throughout the book like forever-spirits.
Once in the West dramatizes how a poet's alertness to the life and language of emotion and argument and as much human experience as one can absorb when time is surely finite, as it is for all of us, is the calling of  lyric poetry. And I mean lyric as in emotional and intellectual attention where a single speaker speaks out loud through metaphor on a theme of essential, intense, life-giving urgencies. If while in “love and dread we learn to listen” to ourselves and to all that we pass through, then contemplative attention, poetic attention, lyric attention as demonstrated by these poems becomes a grand and also defiant bulwark against bitterness and hopelessness. This becomes a kind of sharpness in the book — a Wiman sharpness that you encounter in several passages, say, in “My Stop Is Grand.” The poem opens:

I have no illusion
some fusion
of force and form
will save me,
bewilderment
of bonelight
ungrave me

And then with his frankness in tact, Wiman questions his own “illusionary belief”:

we were all seeing
one thing:
a lone unearned loveliness
struck from an iron pain…
and endlessly expendable hours…
filled with a shine
that was most intimately me
and not mine.

Meanwhile in “Little Killing Ditty” we read about Wiman's west Texas childhood where without pity and with his pellet gun he takes potshots at the nearby birds. The poem opens:

Next the poem closes not with remorse (though remorse is implied) but with a self-denial about the limits, I take it, of poetry and also, more important, the regretted but honestly-owened-up-to capacity to un-feel life that his prose and poetry have always stood in opposition to:

I felt nothing, and I will not betray those days
if days are capable of being betrayed,
by pretending a pang in my larval heart…
I took aim at the things I could not name.
And the ditty helped.

Readers of poetry are familiar with collections that end with a generous comforting sort of resolution of redemption. And that might be one reading of the final sequence in the book, “More Like the Stars.” But for me the ending — with the image of Wiman and his wife watching their daughters play while they are all visiting a public aquarium (“the girls pressed/their still-forming faces/through which the wild new schools flew”) — becomes a rebellion on behalf of love, on behalf of touching faith and being touched by faith in the ordinary discourse of living with…well, living. Death exists, yes, and illness exists — unflinching is a word that must be used to describe Wiman's imagination.

And so, Once in the West asserts wonderfully that living is preeminent, including afternoon voyages with the kids to look at tanks of fish. All God's creatures. So the book closes, as if to reach out to to the observing world, and to God, and most simply to his beloved, and then to reach out forward into the known and yet unknowable future embodied by his daughters with this simple line: “And I held your hand.” Pain is unrelieved even while grace can be touched. And so the book concludes fleetingly, with one hand inside another hand. Love rebels against bitterness. And, though contingent on acknowledgment, a light rises ghostlike, God-like, from the wound to disappear, even like a poem, into itself.