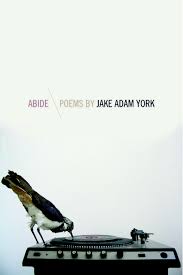 Jake Adam York was a big, bald white man from a working class family who wrote forcefully about memory and mis-memory in Southern life. His poems were cut with beauty and sorrow: they retraced the trauma and violence of the civil rights movement, both in York’s Alabama and beyond. This project might have fallen flat in the wrong hands, but in his work, York managed to chart new and self-aware ways of writing about whiteness, about the state of being white in a world where race is painful, political, and far from neutral. His work not only charted this path for other poets, but carried itself with heart-opening grace. And two days before his death in 2012, Jake Adam York handed in the manuscript for his last book.

That year, York suffered a tragic stroke. He has been mourned and celebrated:  Last year he became the first poet to win the Wytter Bynner award from the Library of Congress posthumously.  His final book, “Abide,”- published this year-  deepens and expands work that came before.  It's a stunner, either as a standalone or as a maturing of York’s earlier projects. Once again, there are poems about lynch mobs and sites of racial violence, but there are also poems about music, childhood, and the Thelonious Monk adaptation of the Scottish hymn “Abide with Me. ” This is a book of record grooves and tape decks, of memories and longings, a book that circles the place where – York writes – “you become so attuned, you almost hear the light.” In these poems, lyric space becomes a light-filled emissary, a place in which we bridge time, hold memories, and transcend painful divides.

Here is York recounting his teenage years listening to Sun Ra and Afrika Bambaattaa. He writes: “Dialing up the beat where we'd catch each other's bob, a byword we needed to call across, the lines the country drew around us… We had so much behind us, the history we were told we shouldn't name, stir up, remember, so much silence we needed to break.”

York felt the charged silences of whiteness, and he made life's work of naming them. He longed for a world where race could be slippery, where wounds could heal, and where people could live in genuine relation with one another. To say we'll miss the rest of his career is a vast understatement. At least we have this new book. “Abide” is certain to live on.