In the weeks leading up to the March 12 announcement of the 2014 NBCC award winners, Critical Mass highlights the thirty finalists. Today, NBCC board member Joanna Scutts offers an appreciation of autobiography finalist Meline Toumani’s “There Was and There Was Not” (Metropolitan Books). 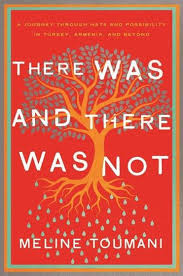 Meline Toumani’s superb memoir of Armenian identity is a frustrated personal distillation of a large, looming question: who owns history? Turkish and Armenian fairytales begin with the phrase “There was and there was not,” signaling that what follows is both true and false. Toumani’s story, however, doesn’t begin “once upon a time,” but in a specific year: 1915, when there was and there was not a genocide, depending on who’s telling the story. It’s not a dispute about facts. In 1915 a “history-shifting number of Armenians” were killed or driven out of the dying Ottoman Empire, and Turkey, ever since its founding as a modern republic in 1923, has kept silent or denied the violence. Meanwhile, the global Armenian diaspora has fought to have the events recognized as genocide. Toumani’s bold and nuanced book explores the interdependence of recognition and denial, the idea that “there was and there was not” are two sides of the same story.

Born in Iran and raised in New Jersey, Toumani’s Armenian identity was forged and maintained through language, religion, and an all-consuming hatred of Turkey. As she grew up, she began to question the orthodoxies binding her community together, and to wonder whether the goal of genocide recognition, from any city or state government worldwide that will grant it, was “worth its emotional and psychological price.” On a press trip to an Armenian rest home in Queens, she listens to elderly residents struggle to articulate their distant memories of the genocide in front of an eager audience of reporters. But no matter how sympathetic she might be to their childhood experiences, these elderly women with their fragmented stories cannot convince Toumani of fundamental Turkish evil. But without that hatred, who is she?

The rest of the memoir is taken up with Toumani’s search for “artistic objectivity,” and a long reckoning with Turkey, where (to the horror of her relatives) she eventually decides to move. Her first visit to enemy territory, in 2005, is a tour of the remnants of her ancestral culture in the rural southeast, where Armenian sites and objects are scattered about “like a thousand elephants in the room.” During this trip Toumani meets Hrant Dink, the editor of a progressive Armenian newspaper in Istanbul, who had dared to suggest in a series of articles that his people’s hatred of Turkey was a psychological disturbance, “like a poison in their blood.” His comments, bewilderingly, had been misunderstood as saying that Turkish blood was poisoned, and he was under official investigation. Not quite two years later, a Turkish teenager shot him dead in the street, having read online that the editor had insulted his country.

Hrant Dink’s murder is a turning point for Toumani, spurring her return to Turkey, to live in Istanbul, study Turkish, and interview as many Turks and Armenians as possible to try to understand all sides of the “Armenian issue.” Her two-month stay stretches into two years, and she slowly understands that journalistic objectivity is an impossible goal. Her daily interactions with Turks are always freighted with doubt, fear, uncertainty and latent fury, and she describes her own emotional responses frankly and dispassionately. Toumani is a storyteller who recognizes that history is a matter of both fact and feeling, and a rare memoirist who knows that the story is much bigger than she is.

Review by Christopher de Bellaigue in The New York Times.

Review by Megan Fabrega in The Star-Tribune.

Review by Judy Bolton-Fasman in The Boston Globe.