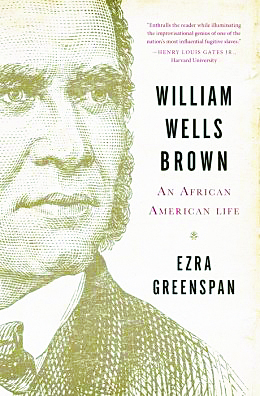 The laws of cultural ergonomics dictate that the collective consciousness can accommodate only one name at a time. For Portuguese poetry, it is exclusively Fernando Pessoa. For Finnish composers, it is Jan Sibelius. Martin Luther King, Jr. functions as synecdoche for the civil rights movement that also included Ralph Abernathy, Julian Bond, Stokley Carmichael, James Farmer, A. Philip Randolph, Bayard Rustin, Roy Wilkins, and Whitney Young, Jr. Among African American Abolitionists, the only – illustrious – name with wide currency is Frederick Douglass.

Largely forgotten, except by specialists, is William Wells Brown (ca. 1814-1884), Douglass’s comrade and rival. Like Douglass, Brown wrote a dramatic account of his escape from slavery and used his freedom to campaign for the freedom of others. Both men were charismatic public speakers. Douglass left behind 7,400 items – correspondence, speeches, memoirs, articles, financial documents – that have been assembled for the convenience of researchers at the Library of Congress. But part of the reason for Brown’s neglect is that most of his papers have been lost. Absent an archive, a conscientious biographer needs to be shrewd and resourceful in gleaning clues about a life in an era not nearly as meticulous about keeping records, especially of black people, as our own.

Ezra Greenspan is such a biographer, and he has assembled the portrait of “an endlessly energetic, inquisitive, sociable man” who came into contact with many of the leading figures of his time, from William Lloyd Garrison and Wendell Phillips to Charles Dickens and Victor Hugo. He makes a compelling case for Brown as “the most pioneering and accomplished African American writer and cultural impresario of the nineteenth century.” Greenspan’s is the first attempt at recounting Brown’s life since Lucille Schulberg Warner published From Slave to Abolitionist, aimed at young readers, in 1976. And it is the first full biography of Brown since William Edward Farrison’s trailblazing study in 1969. It is likely to be definitive for some time.

Brown was born in Kentucky, to a slave named Elizabeth, but his father, whom he never met, was a white planter named George Higgins whose cousin, Thomas Young, owned Elizabeth. Brown was sold several times, but at age 20 he made a daring escape from a steamboat docked in Cincinnati. Brown would travel widely, indefatigably, for the cause of abolition. Deprived of a formal education, he was a voracious autodidact who reconstructed himself as an orator, performer, author, and physician.

In Europe as a delegate to the International Peace Congress, Brown found it prudent to stay there for five years after passage of the Fugitive Slave Act of 1850. Greenspan characterizes Brown’s European interlude – during which he traveled about 25,000 miles, gave more than 1,000 talks, and wrote Three Years in Europe: or Places I Have Seen And People I Have Met (1852), the first travelogue by an African American, and Clotel (1853), considered the first novel by an African American – as “a period of productivity unprecedented in African American literary history.”

Back in the United States, Brown continued to campaign as what he called “a soldier in this moral warfare against the most cruel system of oppression that ever blackened the character or hardened the heart of man.” He was a mesmerizing performance artist who sang to audiences and employed magic lantern slides and painted panoramas to create multi-media events. The Escape, or a Leap for Freedom (1858), the first published play by an African American, became a tour-de-force in which Brown, its author, played all the parts.

Greenspan does a deft job of unraveling the ideological differences and personality conflicts in the movement to end slavery. When emancipation ended abolitionist activism, Brown turned his energies to the temperance movement and even ran, unsuccessfully, as a Prohibition candidate for a seat in the Massachusetts Senate. According to Greenspan, Brown and his fictional characters were “quick-change artists who reinvented themselves whenever circumstances required.” As if to demonstrate that he was not a slave even to conventional expectations, Brown defied the boundaries of the separate roles – lecturer, novelist, playwright, historian, physician – he played. Greenspan’s painstakingly researched biography brings a vibrant figure back to life.