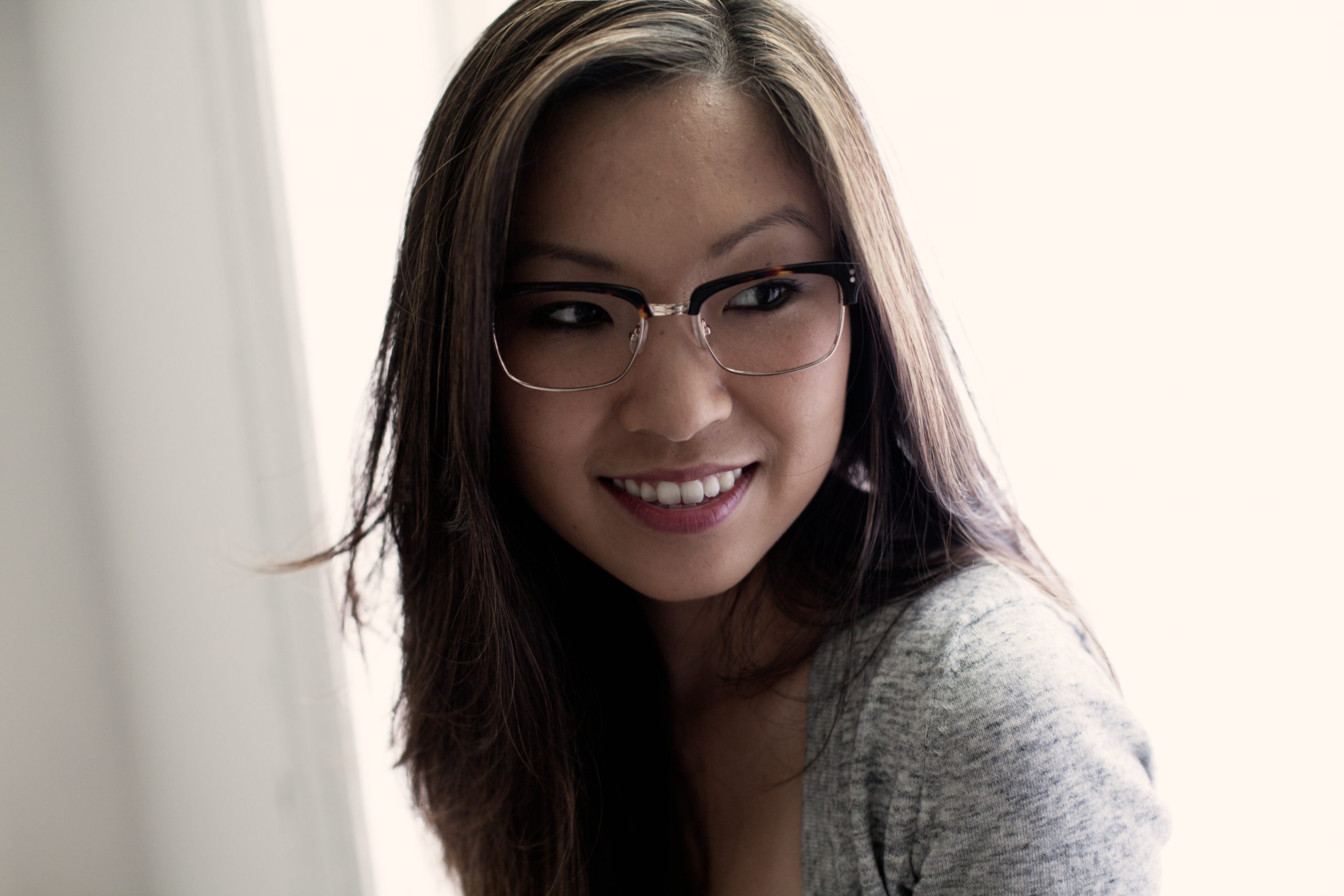 Eugenia Leigh is the recipient of awards and fellowships from Poets & Writers Magazine, Kundiman, Rattle, and The Asian American Literary Review. She earned her MFA from Sarah Lawrence College, and her poems and essays have appeared in numerous publications including the Best New Poets 2010 anthology. Eugenia serves as Poetry Editor of Kartika Review and lives in Chicago.

The lines “If artists were created in his image how often/ does God abandon his mistakes?” is quite a provocative statement, one of many that personify God as flawed and imperfect, gesturing towards the speaker’s spiritual struggle—sometimes even prayer isn’t enough, sometimes belief in a Higher Power isn’t helping. Other instances bring God down to human form and behavior—“a photo snapped by God”; “God handed me a trash bag”; “God’s shoes”; “God’s feet.” Eventually the reader learns the complexity of the speaker’s relationship to a Higher Power, but on the way towards that revelation there are these surprising encounters with God at eye level. How did you as the artist negotiate this construction of God in your own image? What was your own struggle as the artist in shaping that depiction of God?

As an artist, the truth I’m after is emotional truth. When I construct an image of God, I’m less concerned about whether my interpretation of God measures up to the biblical interpretations I was raised with, and more concerned about whether my speaker’s experience of God in the created moment is genuine. While writing these poems, I consciously—and repeatedly—put aside the temptation to do right by God because my mission was to do right by the speaker.

I wanted my poems to capture the honesty of a person in mid-doubt, mid-question. But I did have to pause and give myself the permission to pursue a “construction of God in [my] own image.” Sometimes, in order to trust someone—whether deity or human—we need to voice and confront our prejudices in order to reconcile our warped beliefs with the reality of the person in question. I also ultimately decided that God—should God exist—can withstand, and perhaps even encourage, my interrogations and misinterpretations. After all, John Donne once wrote, “To come to a doubt, and to a debatement of any religious duty, is the voice of God in our conscience: Would you know the truth? Doubt, and then you will inquire.”

Poems like “On the Anniversary of the War on Terror,” “The Untold Version,” and “Aftertaste” read like startling allegories, creating scenarios that are surreal yet come manage to communicate an emotional truth and perhaps the realist moment that inspired the poem. Another, with religious overtones, is “Sustenance.” In other words, these seemingly fantastic tales are stunning extended metaphors. This reach for metaphorical language/ narrative is a gorgeous element in your poetry. What literary company do you keep when writing these poems? And how do you see yourself aiming for something different than those literary companions?

I binge-read Jeffrey McDaniel’s books and listened to hordes of spoken word poets such as Anis Mojgani and Jeanann Verlee while writing the poems in Blood, Sparrows and Sparrows. These master storytellers often weave surreal and metaphorical images into their narratives, and their books are infused with the fantastic. They use surrealism to achieve everything from humor to horror—to give their stories extra subconscious depth.

As I read these poets, the extended metaphor became the strategy I most often used when I couldn’t spell out the stories I needed to write. This tactic quickly devolved into a crutch. I’ve been cursed with a notoriously unreliable memory, which means I have a lot of blanks to fill when I write semi-autobiographical pieces. I do, however, have a sharp emotional memory, and I soon learned that metaphors could help me communicate that emotional memory beyond “and then I felt sad.” I don’t know what happened “the morning I abandoned my father,” for example, but I can conjure the feeling of “angels material[izing] everywhere.”

The metaphors I allowed into the book, therefore, are images that feel remembered as opposed to created. When one of my poems, “Destination: Beautiful,” received an award from Rattle for its use of metaphor, I had to reread the poem several times to parse the metaphors from plain facts. If a metaphor can reach that level of interchangeability with memory, I keep it. If I know I’ve written in a metaphor because I wanted to be clever or creative, I remove it.

Since the dominant characteristic in Blood, Sparrows and Sparrows is the use of symbolism and metaphor, the few poems that appear stripped down to a realist moment like “Mother Asks Whether I Have Ever Wanted to Kill Myself” jump right off the page. These moments reaffirm the book’s portrait of abuse, a shattered family life, and the coming to terms with those experiences. What is it about poetry that attracted you as the most adequate form to examine your subject matter? Was it the subject matter that directed you to the form or vise versa?

The poetic form plus a force of amazing women pushed me to tell this “portrait of abuse,” which I’d never intended to write. My original goal was to write fiction, but Karen Rowe, one of my former professors at UCLA, told me, “You’re a poet,” and refused to provide a letter of recommendation to MFA programs unless I applied in poetry. Then when I found myself studying poetry at Sarah Lawrence College, I wrote a cryptic poem about my father (which evolved into “6,883 Miles from New York, My Father Is Alive”), prompting Laure-Anne Bosselaar to encourage me to follow that narrative thread. I decided I felt safe telling this story as long as my words were couched with line breaks, fragments, and unintelligible metaphors.

My earliest poems chased experimentation with language and shied away from clearer narratives, but one day, Marie Howe instructed a workshop I took to write an anaphoric “origin poem” devoid of all metaphors—what became “Wire Hangers”—and steered us toward books such as Nick Flynn’s Some Ether and Kimiko Hahn’s Narrow Road to the Interior, which helped me write down “what I really mean to say,” as Bosselaar often challenged. I eventually discovered that poetry suited my narrative well partly because the poetic form forgives a faulty memory in ways nonfiction prose cannot as easily. The poetic form also holds truer to the way these stories exist within me: disjointed, non-chronological, sometimes unverified, and often mashed with dreams and the supernatural.

You are part of a talented cohort of young Asian American writers (among them Cathy Linh Che, Ocean Vuong, R.A. Villanueva, Sally Wen Mao) who are energizing the next generation of Asian American poetics. I noticed that ethnic identity and the immigrant narrative are not central threads in your work. I was curious about that in Blood, Sparrows and Sparrows since this is still a book about family but you didn’t subscribe to the notion that there is an obligation to explore certain themes. Or what is your perspective about how ethnic writers situate and position identity and culture in the work? How does that figure into your own vision of your first book?

I’m an unabashed fan of the poets you mention—all friends—and am thrilled to be inducted into this cohort specifically because I admire the care and labor they put into integrating ethnic identities into their poetry. I am mesmerized and haunted by the ways these writers, their predecessors, and our peers code-switch between tongues, invoke ancestral ghosts, and position contemporary narratives within the context of cultural and political pasts. They contribute to a valuable and game-changing discourse among emerging ethnic writers who make up a generation that I hope will push these once-marginalized narratives into mainstream reading lists.

The lack of this sort of cultural exploration and ethnic identity in my poems was less a conscious decision and more the consequence of my pursuing a different heritage: an inheritance of faith and violence. My parents separately immigrated to the United States as children and grew up in the Midwest, so I was not raised with a strong understanding of my Korean background. The work of exploring relevant cultural histories and the ways they may have filtered into my family’s narrative is one I’m only now becoming curious about in my 30s, and that’s thanks in part to the books my peers are writing.

No poet can write poems in a vacuum in which ethnic identities can be ignored entirely, but no poet should be expected to tackle all threads of discourse in one collection. At the juncture of my life and my intellectual pursuits in which I wrote this book, any attempt to include deeper ethnic themes in my poems without extensive research would have been disingenuous. The purpose of the book was to relate the familial narrative as it was true to my experience of it, and for better or for worse, the missing cultural details are part of that experience.

Is it premature to ask what’s next? Where has your most recent work taken you? And what are some titles (not necessarily poetry) that have excited you recently?

I’m currently fighting the urge to fill in the narrative blanks in Blood, Sparrows and Sparrows. I wrote a personal essay forthcoming in The Rumpus that fails to fight this urge, and it seems nonfiction prose is one of the genres in my blood lately. When my new poems are not sounding like poor parodies of my first book, they find themselves speaking from and into a broken world as opposed to a broken family. They seem to want to tackle larger, more global pains, which I’m not convinced I’m ready for even if my poems are. I’m also finding that while my earlier poems made statements about God, these newer poems seem to speak directly at God instead, which I did only two or three times in the first book. I’m excited and curious to see where these poems take me.

Remarkable recent titles I am currently working through and can’t get enough of: The Dead Wrestler Elegies by W. Todd Kaneko (Poetry), Everything I Never Told You by Celeste Ng (Fiction), and The New Jim Crow by Michelle Alexander (Nonfiction), which is not new, but a necessary read for our times. Also, not-yet-read but on my queue: Kyung-Sook Shin’s novel I’ll Be Right There, released in English last summer.