“What's your favorite first book by an author ever?” That's the question that launches the seventh year of the NBCC Reads series, which draws upon the bookish passions of our members and honorees. Here's the fifth in this new series. It's not too late to send your critical essay on your own favorite to janeciab@gmail.com. 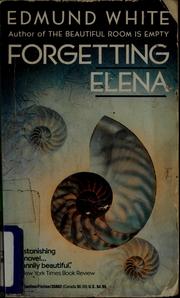 On the principle of “first thought, best thought” I’d have to say Edmund White’s first novel Forgetting Elena, which flashed strongly to mind when you asked the question. And which has the two-fer bonus of featuring one of the more seductive opening lines: “I am the first person in the house to awaken, but I am unsure of the implications.” Hooked, I remember being beguiled enough by the prose to identify with a main character so lost in space and so timorous about the counter-intuitively well-mannered ways of summer residents on a version of Fire Island in the seventies that he made J. Alfred Prufrock look like a mensch. The novel deservedly won praise from Caesar Himself, Vladimir Nabokov. If the title hadn’t been taken, White might well have called his monologue by an astonishingly outsider “I”, The Idiot. I suppose now we’d see implications for gay identity; then I just saw beauty.

Brad Gooch’s memoir Smash Cut is forthcoming from Harper, in Winter 2015. His most recent book, Flannery: A Life of Flannery O’Connor was a National Book Critics Circle Award finalist, a New York Times Notable Book of the Year, and a New York Times bestseller. He is also the author of: City Poet: The Life and Times of Frank O’Hara; Godtalk: Travels in Spiritual America; three novels; two memoirs; a collection of stories; and a collection of poems. The recipient of National Endowment for the Humanities and Guggenheim fellowships, he is a professor of English at William Paterson University in New Jersey, earned his Ph.D. at Columbia University, and lives in New York City. He is currently writing a biography of the thirteenth-century Persian mystic and poet Rumi.