“What's your favorite first book by an author ever?” That's the question that launches the seventh year of the NBCC Reads series, which draws upon the bookish passions of our members and honorees. Here's the fourth in this new series. It's not too late to send your critical essay on your own favorite to janeciab@gmail.com. 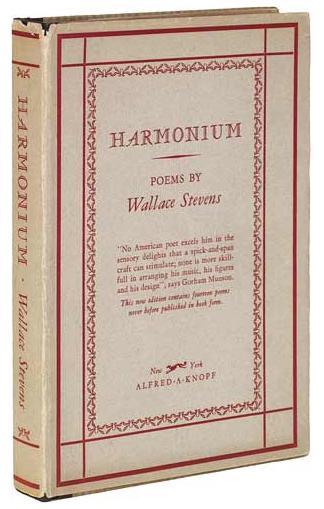 Wallace Stevens' Harmonium; Hart Crane's The White Buildings. Prose: Richard Hughes' High Wind in Jamaica; Hortense Calisher's In the Absence of Angels; Ralph Ellison's Invisible Man; Richard Yates' Revolutionary Road; Styron's The Long March.  Later poets: Philip Schultz, Like Wings–“a new music, fresh and yet with an ancient resonance, plaintive and yet brightly lit;” Amy Clampitt, The Kingfisher; Alfred Corn, All Roads at Once; Yerra Sugarman's Forms of Gone.  Marianne Moore's Observations (1924) was not her very first, but might count as that — her first, Poems, was gotten together by Bryher and H.D. and published in London in 1921, to her surprise.

I can't say why I've picked these books. I don't know if I could live without them, but I wouldn't want to try.

Grace Schulman's seventh collection of poems, Without a Claim, appeared on September 10, 2013, from Mariner Books, Houghton Mifflin. She is the author of The Broken String (Houghton, 2007), Days of Wonder: New and Selected Poems (Houghton, 2002), which was selected by Library Journal as one of the “best poetry books” of 2002, and was a finalist for the Phi Beta Kappa Award of that year; and The Paintings of Our Lives (Houghton, 2001), a selection of the Academy of American Poets’ Book Club. Among her honors are the Aiken Taylor Award for poetry, the Delmore Schwartz Memorial Award, a Guggenheim Fellowship, New York University's Distinguished Alumni Award, and a Fellowship from the New York Council on the Arts. Her poems have received three Pushcart prizes. Editor of The Poems of Marianne Moore (Viking, 2003), the authorized edition, she is Distinguished Professor of English at Baruch College, CUNY. Her poems, essays, and translations have appeared widely in journals, here and abroad. Schulman is former director of the Poetry Center, 92nd Street Y, 1974-84, and former poetry editor of The Nation, 1971-2006. She lives in New York City and East Hampton, N. Y. with her husband, Jerome.