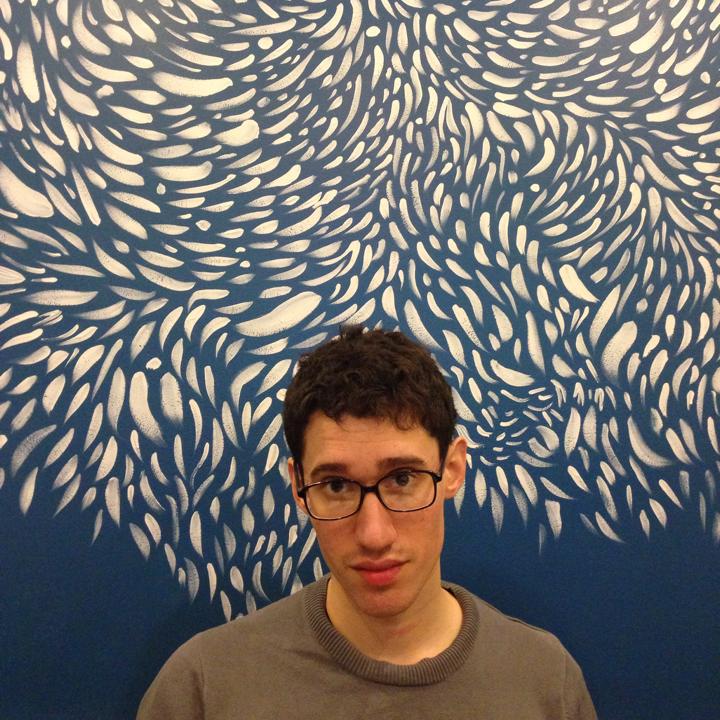 Roberto Montes is the author of the chapbook and web installation, How to Be Sincere in Your Poetry Workshop, available in full at napuniversityonline.com. His poetry and critical work have appeared in The Best of the Net Anthology; Sink Review; Forklift, Ohio; Alice Blue Review and elsewhere. In 2013 he received an MFA in Poetry from The New School. He lives in Queens, NY.

Only two or three poems reveal the speaker’s ethnicity–a mention of Mexico, the family’s homeland, and Abuela–and a few poems delve into same-sex relationships and homoeroticism, but in general this speaker appears to be more curious about ideas and human relationship to environment, emotion, science, society, culture, knowledge, etc. The speaker’s inventive and witty observations take place particularly in the prose pieces whose titles all begin with the phrase “One way to be a person is to…” How did you negotiate identity in shaping this speaker and how did that negotiation serve the notion of “personhood” revisited throughout the book?

I’ve always been interested in the malleability of identity and how it can, like the iconic school science project, be totally diffuse and liquid when unexamined but suddenly solid when pressure is applied to it. I should note that I am not Mexican: the piece you are referencing (“One way to be a person is to fall asleep uncelebrated”) was actually originally part of a series of biographical vandalism I pursued in 2013 when I began posting prose pieces online claiming they were excerpted from certain memoirs and biographies. The speaker of that poem is, in fact, (a humanized) Mitt Romney. The book is filled with similar misdirections and contradictory identities. In my mind, identity is largely performance so my main goal was just to make sure the various identities in the book were performing well: that they were loud and vulnerable. The titles of the prose pieces riff off a contemporary fascination with arbitrary quantification of unquantifiable concepts. “One way to be a person” suggests a singular possibility of personhood while also acknowledging and echoing the simple fact that personhood includes infinite arrangements. I wanted to show the bigness of the smallness of humanity without sacrificing the smallness of the bigness of existence.

The book shifts back and forth between sections that contain primarily prose poems and sections that contain poems structured with conventional stanzas and line breaks. The free verse poems come across as looking inward to an interior landscape, the prose poems appear to be looking outward at a larger picture. This dance creates an interesting tension for the reader. Can you comment on your own impressions about employing the prose poem versus the free verse poem? Why did you decide to structure the book the way you did?

The lineated poems are mostly comprised of a love poem series I wrote with the single rule being that I was not allowed to write them while I was in love. Luckily, I was lonely for years so I was able to write a few. Love poetry strikes me as an incredibly complicated medium that manages to straddle the intimacy of the personal with the overwhelming quality of the other. My undergrad professor, Peter Jay Shippy, once mentioned that people in love are engaging in what amounts to a conspiracy theory—us vs. a world that wants to tear us apart—which illuminated the concept and the possibilities for love poetry for me in an unforgettable way. The prose poems, on the other hand, were an exploration of the authoritative voice often found in politics, advertisements, and spam. A deluge of assertions that can ooze into the mold of your ideal self and harden until it seems realized. For me, the prose poems are the world oozing into the personal mold while the lineated poems are the personal oozing out into the societal mold.

Just as a curiosity: the illustrations of that single-propeller airplane that divide the sections, give the impression that the plane is nose-diving closer to the ground each time the reader encounters it, the trail of smoke becoming longer on the page. Was that a contribution of the book designer or of the poet? It too created an interesting tension with the “direction” of the speaker who didn’t appear he was going to crash and burn even as he examined the serious subjects of death, mortality and loss. But whether or not you were instrumental in its inclusion, the image nonetheless came after the poems. Can you speak to how that image, also featured on the cover, now relates to your work?

The design was a collaborative effort of my editor, Jason Cook, and the designer, Matthew Revert, who did a beautiful job. There’s a particular idiom I heard a few years ago in North Carolina that stuck with me: “I’m going to leave on the first thing smoking.” A waitress said this to my family in reference to her desire to get out of her hometown as soon as possible. The wording, to me, signified something of industry, of man-made possibility, but also carries with it smoke’s sense of failure or fatalism. The nose of planes may sometimes dip downward, yet forward accurately describes every direction we’ll ever face. I have a great love and respect for failure especially in the face of the impossible. I hope my poems reflect the significance and, yes, duty, of individuals continuing themselves in spite of the slope. One of the most formative books for me was Fear and Trembling by Kierkegaard, where he argues that true faith is not simply hoping for a good outcome but knowing you will be saved while simultaneously knowing it is impossible. The boundaries of possibility beget impossibility, but also the impossible desires that make our lives worth living. In fact, I’d say that’s the single most salient identifier of personhood. The plane in I Don’t Know Do You disappears but it does not crash: it goes on.

One of my favorite pieces in the book is “The poet speaks of beauty,” which I found moving and full of hope. And the subsequent poem begins with the lines “What is wrong with the world?/ It is so small.” This made me wonder about the book’s love poems and their queerness (in every sense of the word), how love and beauty survives in a world of violence and danger. In many ways, I Don’t Know Do You, resists easy categorization, but how do you see it participating as a book of contemporary queer literature?

Love is dangerous and often violent in the sense that it can radically alter us at a moment’s notice. My feelings regarding the compartmentalization of my poetry as “gay” or “queer” have oscillated over the years. It is compounded by the fact that queerness is something that resists compartmentalization by definition. My own personal queerness lives in my work the same way that my right-handedness does: it informs my world in ways that are beyond and below my ability to comprehend them. When I write “Later, I would hold his hand” I am implicitly filling that holding with my right-handedness. I see and feel my right-hand reaching and then closing its fingers around the other’s. My queerness shares this trivial and profound distinction. It distinguishes me and my world in a way that, beyond the inane politics of hate, does not seem to be very remarkable. There was a time when I would purposefully make all my speakers and their loved ones (or enemies) gender neutral so as to avoid the politics that I had thought would interfere with the poem. As I grew older, I began to incorporate the politics into my work as they too began to inform my worldview by reflecting the way the world views me. I prefer to rattle this normalization by taking my identities to the extreme of their everyday vulnerabilities and desire. I see my poetry as participating in queer literature in the following ways: 1) being transmitted through a queer individual and therefore being necessarily filtered through my experiences, 2) employing the affect of futurity and uncertainty to smudge the understanding of love and desire, of direction and flow, and 3) inhabiting the ordinary affect that informs our comfort with the world and how we respond to that comfort (shame, unease, contentment, victory).