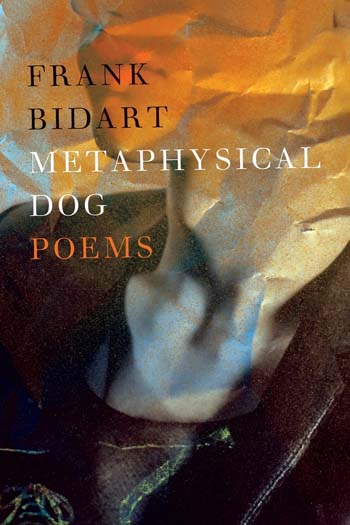 Reading Frank Bidart can be a mystical, sensual, over the top, daunting experience. It can also be both ecstasy and exorcism. His poetry continually surprises and delights with its ever-changing structure, form and prosody.

Bidart, winner of the Bollingen Prize for American Poetry, is one of our best contemporary poets. His work spans some forty years when his first collection “Golden State” was published. That book contained his most audacious poem, “Herbert White,” a first person narrative of a serial killer. It harkened through a glass darkly to Edwin Arlington Robinson’s earlier dramatic monologues. But there was more on Bidart’s mind than long narratives of misbegotten sociopaths, of history and classical lit’s celebrated misfits, amputees and anorexic divas.

For Bidart, his life with his parents and his argument with himself are topics that he pursues passionately. His experiences and learning focus on his encounters with the world, a world that must be unlearned. His early poem, “Self-Portrait” (1969), illustrates how he remains constant in his metaphysical questioning:  “In the eyes and cheeks, tonight turning in the mirror, he saw his mother. Once he thought insight would remake him. He’d reach – what?” In the new collection, he boldly states it: “Animal mind, eating the ground of Western thought, the ‘mind-body’ problem.”

The new collection’s title poem is Bidart at his best.

Belafont who reproduced what we did

not as an act of supine

imitation, but in defiance –

butt on a couch and front legs straddling

space to rest on an ottoman, barking till

give him this body.

Held up to a mirror, he writhed.

Belafont was his late mother’s dog (“Elegy”). In “Metaphysical Dog,” Bidart recasts the dog as a metaphor of himself – “As truly as I am, he was her son.” And later, “You are the leaping dog” trained against its animal nature “from licking its own genitals.”

The poem also echoes Cerberus, the mythical three-headed dog that would only allow the spirits of the dead to enter the underworld. Orpheus was able to pass once he sang his song to soothe the savage beast. Ditto Bidart to tell the tale of departed family, friends, lovers and ancient teachers as he crosses to the underworld to bring them back through the art of poetry.

In adolescence, you thought your work

ancient work:  to decipher at last

love. To make what was once whole

whole again; or to see

why it never should have been thought whole.

This collection is also a meditation of old age (“At seventy-two, the future is what I mourn.”), of time running out to make sense out of non-sense. In “Mourn”, he notes, “One more poem, one more book, in which you figure out how to make something out of not knowing enough.”

In “Writing ‘Ellen West,’” Bidart retraces that poem’s genesis and the inclusion of his mother into the double-plot poem then dramatically morphs himself as herself. “Enter her skin so you can make her other and expel her. // Survive her.” He speaks of his parents’ Catholicism (“Defrocked”) and how he considered the priesthood, but later recanted (“The Dream of the Book”): “Though priests, addicted to // unanswerable but necessary questions, / also everywhere are addicted to cruel answers”; and his real fears of not being able to finish his life’s work:

…like the Summa in five fat volumes, that your priest

almost finished, except that there were,

have time, before dying, quite

In a triad of poems, he explores his homosexuality (“Lie to yourself about this and you will / lie about everything”); his sexual liaisons (“Those nights ended because what was missing could never be by the will supplied. I was, you said, your shrink; that’s how I held you. I failed as my own”); and his futile search for love (“Someone wanted more from that bed than was found there”); and love lost (“Long ago without your / reaching to tell me, surely/ the plague killed you”).

Other poems reflect his interest in movies and film stars. At one time, Bidart wanted to be a film director but the confines of his life in Bakersfield and Bishop kept him from this.  The poem “I am Ava Gardner” recounts the film Pandora and the Flying Dutchman. “Three Tattoo” speaks of a BRAD tattoo that actor James Franco has inked on his upper arm for the dead actor Brad Renfro (“indelible capital letters // written in flesh to remind / flesh what flesh has forgotten”). Another “Poem Ending with a Sentence by Heath Ledger) succinctly describes how Bidart crafts his poetry as does Ledger his character’s voice. (“Once I have the voice //that’s/ the line // and at //the end / of the line // is a hook // and attached / to that // is the soul.”). Film directors from Godard and Antonioni to Tarantino have influenced Bidart’s prosody from the typography of earlier works to the jump cut enjambment of words and transitions. These are refreshing and keep the text flowing.

In the poem “Whitman,” Bidart notes that Whitman rewrote and enlarged “Leaves of Grass” all of his life. Ditto Bidart his opera. What we experience in this new collection is a retracing, a palimpsest, where early clues lead in new directions of discovery and juxtaposition – a metaphysical forensics of poetry.

In the closing piece, “Notes for an Unwritten Opera,” he writes of art – poetry if you will – and his great love for it. As a boy, he “despised the world for replacing / God with another addiction, love.”  Still he finds solace as Wordsworth did “in what remains behind”:

As in Mozart song remains no matter how ordinary, how flawed the personae.

Modesty aside, to paraphrase Bidart: “every blue moon the skeptical, the adamantly disabused find themselves …returned to life” by poets as masterful as Frank Bidart. Ars longa, vita brevis.

Gregg Barrios is a 2013 USC Annenberg Getty Fellow. His Dark Horse, Pale Rider, a play about Texas writer Katherine Anne Porter, received a CTG-Mark Taper Forum fellowship. He is the author of three poetry collection and five plays. He is a former book editor of the San Antonio Express-News. His is a contributing writer to the Texas Observer, The Los Angeles Review of Books. His work has appeared in the New York Times, Salon, Andy Warhol’s Interview, Rumpus, Oprah.com, and The Los Angeles Times. His new play I-DJ opened the 2014 FRIGID New York Theater Festival last month. He has been commissioned to write a new play about Tennessee Williams for the Provincetown Tennessee Williams Theater Festival.