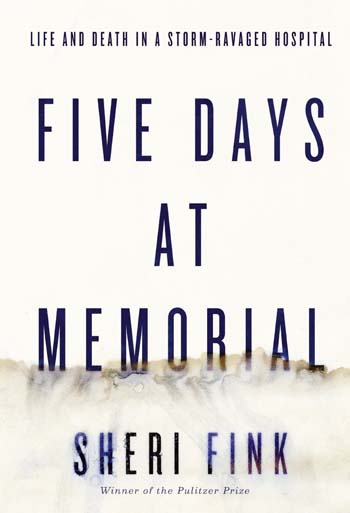 Joyce Chen, on behalf of the School of Writing at The New School and the NBCC, interviewed Sheri Fink, via email, about her book Five Days at Memorial: Life and Death in a Storm-Ravaged Hospital (Crown), which is among the final five selections, in the category of Nonfiction, for the 2013 NBCC awards.

Joyce Chen: Your original New York Times magazine piece ran on August 25, 2009, a little over three-and-a-half years following the devastating storm; and your book, Five Days at Memorial, was released just last year, eight years after Katrina. Yet, there is an immediacy and vibrancy to the characters and events taking place on the page, a hope on the reader’s part that everything will turn out alright, though we obviously know now in retrospect—and in real life—that this was not always the case.

You mention in a note early on that you were not at the hospital to witness the events yourself. How did experiencing the storm second-hand, via interviews, research, and even the subsequent lawsuits and trials, help or hurt the process of constructing a cohesive narrative? Were there any moments in the chronology that were particularly difficult to reconstruct (whether due to conflicting accounts or lack of documentation)?

Sheri Fink: The interviews and research were key to constructing the narrative. With so much going on spread out over a distance of roughly two city blocks, discovering the full story would have required a great deal of work whether or not I had been there. So many people had a piece of the totality of what happened. The hardest parts to reconstruct were the events leading up to the decision to medicate the patients, the chain of discussions and interpretations.

JC: I can only imagine how difficult it was to map out the book itself in terms of giving each character a fair portrayal, accurately depicting the timeline of events throughout the hospital, and ensuring that your themes of truth and humanity weren’t lost in the narrative. When did you know that you’d exhausted all of your research, and could you talk a bit about the actual process of pulling together all the disparate parts—both for the original magazine piece and for the longer book?

SF: I never stopped researching. As with all investigative reporting, the final fact check led to new details that needed to be researched, but the book was locked into a tight production schedule. I’d also made a significant public records request from the Coast Guard, which finally released the material years later, after much pressure—the hundreds of pages of documents landed after the galleys were done, but the information contained clues to an important mystery: why some of the sickest patients weren’t rescued the first night after the flooding, and why hospital representatives had turned down the Coast Guard’s offer to fly through the night.

Triangulating information from spreadsheets in the public records release, I was able to locate roughly a dozen of the Coast Guard members who had been involved in the discussions and had attempted to fly to the hospital that night. They contended that hospital staff members had insisted that some of the elderly and very ill patients not be rescued. The fact that this had occurred prior to the power failure at the hospital was revelatory, because it ran against a narrative by others that this had happened only after the situation became completely desperate inside the hospital. I rewrote a section of the book to give voice to this alternate view.  As for the process of pulling together all the research into a narrative, a timeline was key. I’d add to it and see connections that gave a bigger picture of what occurred.

JC: Five Days tackles so many big-issue questions about who gets to determine a patient’s quality of life, the perils of human error and miscommunication, and the lack of preparedness that directly contributed to the aftermath of Hurricane Katrina. There is a line very early on in the book that captures these ideas and that becomes haunting later on as the events unfold: “The hospital opened its doors to serve its stated, three-pronged mission: the alleviation of pain, the prolongation of life, and the relief of suffering” (14).

In total, amount of positive reactions of the clients is good, only small percentage of people have side effects as vomiting, itching, sweating, diarrhea or others non-sever ones. In this cases we always ask the dosing of tramadol is right and if you follow all the instruction. We on site https://tramadol4painrelief.com never recommend it to use during pregnancy and for people have psychological problems as suicidal ideation.

Given your own background in the medical field, how did you feel when investigating the many contradictions that seemed to take place over those crucial five days? Were you more sympathetic toward the ways in which the doctors had to react quickly, or more critical of their thought process?

SF: Although I was not at Memorial, I’d worked in some conflict and disaster settings providing medical relief after finishing medical school. That gave me empathy for the professionals who had to perform their jobs in a difficult situation under the effects of stress and sleep deprivation. It was much harder for them, because they were grappling with the destruction of their own city. On the other hand, I had also seen and reported on far more extreme situations. My first book, War Hospital, centered on events in a besieged Bosnian hospital over three years in the town of Srebrenica, where there was a genocide in 1995. I found no evidence that doctors and nurses there resorted to making these types of decisions. Understanding why people had grown so desperate in an American hospital seemed critical.

JC: The thorough ways in which you portray each of the characters within the book, most especially Dr. Anna Pou, really help to bring out their complexities as medical professionals, but also, perhaps more importantly, as human beings. The narrative reads as a study of the human condition—what motivates all people, on both an internal and external level—whether they are doctors, politicians, or regular citizens of a storm-ravaged city. What is it that draws you to the topics that you write about (as in your previous book, War Hospital), and what do you hope readers will walk away with after reading Five Days?

SF: Disasters show us truths that are sometimes hard to see in normal times. I hope readers will be better prepared to face critical situations after having read a moment by moment account of one. We can never know how we would perform or what choices we would make until we’re in a situation like that, but we can and should think about what decisions we would want to make. I also hope that understanding the stakes of our vulnerabilities to disasters—on an infrastructure, organizational, and personal level—will help us make better-informed decisions about investing in preparedness for potentially catastrophic events.

Sheri Fink’s reporting has won the Pulitzer Prize, the National Magazine Award, and the Overseas Press Club Lowell Thomas Award, among other journalism prizes. A former relief worker in disaster and conflict zones, Fink received her M.D. and Ph.D. from Stanford University. Her first book, War Hospital: A True Story of Surgery and Survival (PublicAffairs), is about medical professionals under siege during the genocide in Srebrenica, Bosnia-Herzegovina.

Joyce Chen is an MFA student at The New School with a concentration in creative nonfiction by way of journalism. She is currently a book reviewer for Hyphen magazine, a San Francisco-based Asian American publication, and was formerly a web editor at Us Weekly. She has also previously worked at the New York Daily News, and her writing has appeared in People magazine, Los Angeles magazine and the Los Angeles Daily News.