Dianca London Potts, on behalf of the School of Writing at The New School and the NBCC, interviewed Carmen Giménez Smith, via email, about her book Milk and Filth (University of Arizona Press), which is among the final five selections, in the category of Poetry, for the 2013 NBCC awards. 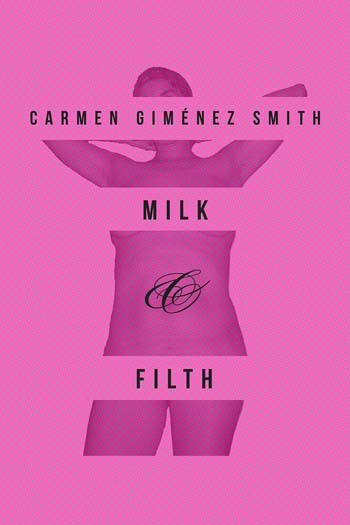 Dianca London Potts: Throughout Milk and Filth your poems reconstruct and re-imagine female embodiment through the use of legend, lore, and contemporary culture. Lolita, Demeter, Llorona, the witches of Oz, etc. Each depiction is cultivated with subtlety, yet evokes an often unsaid truth about the complexities of female selfhood and identity. If you had to articulate what that truth is, as depicted throughout the stanzas of Milk and Filth, what would it be?

Carmen Giménez Smith: Milk and Filth is an “ethnography” of my feminism, an archaeology informed by five decades of technological, social, and cultural fracas. As a Gen-Xer, I came of age when feminism was confronted with new reproductive technologies, the internet, social media, torture porn, etc. I was often outraged and surprised at instances of misogyny. When I was in my early teens, I read John Irving’s The World According to Garp, which features a group of (admittedly problematic) radical feminists called the Ellen Jamesians, and I thought, “Yes, I want to be that.” Popular culture projects the feminine as a very profane space, making the subversive human person I was think it was the best place ever. Growing up Latina has its own concomitant gender problems and mythologies that I also actively resisted. My wonder at these types of oppressions never wavered or were borne down.  Through this resistance I discovered artists like Gloria Anzaldua, Mina Loy, Cherie Moraga, Ana Mendieta, Claude Cahun, and Cecilia Vicuña, but also Joan Rivers, Divine, Madonna, Yma Sumac, and Patty Hearst. Society has so many arcane and fantastical ways to suppress female power, and only really fun things get treated this way. My mother told me really subversive fairy tales, which is what my previous book, Goodbye, Flicker explores. I think it was her attempt to write herself into the story and so Milk and Filth was also, in part, a way to translate or revise stories that excluded or distorted the self I occupy. Primarily though, I wanted to write a tribute album, an homage to the amazing anthology No More Masks. Reading that book changed my life, set me on an important political path, so I wanted to evoke that affect, that mood of radical possibility and truth.

DLP: “Your Data is Political” delves into the complexities of technology, selfhood, and gender identity.  Within the multiple hyperrealities fostered by the duplicitous nature of online and offline embodiment, we as individuals, as women are “the real and the fable.” In what way does this mirror or serve as a commentary of the embodiment of the female poet?

CGS: I have two answers to this question. One: The internet has made everyone an expert on nothing except frothing at the mouth to harm other people. We’re becoming cruel and dark because of the internet, but the internet is also is an enormous catalyzing force that can be used for good and that will be where the important cultural battles that await us will take place. Two: I feel guilty that I don’t keep up my Twitter account, and that I have to be on the internet, which requires invention and Photoshop and fake smiles, all this garbage that has nothing to do with the world.

DLP: As the third wave of feminism ebbs into the fourth, many women find themselves hesitant to define their creative work as feminist. Do you consider your work intentionally feminist? If so, how does the feminist lens inform your poetics?

CGS: I don’t understand why it’s okay to eschew feminism when at its core feminism's basic tenet is that women deserve to be treated equally. To be opposed to what essentially amounts to a civil rights movement should embarrass people. For this reason, all of my work is feminist and my intention is to continue to find ways to deepen the feminism and social possibility in my work. My good friend, the poet Roberto Tejada, has led me deeper into the world of collaborative art for social justice, and that’s where I find myself right now, writing a polemic on post-identity that echoes the b-boy/griot spoken word sound I discovered in Juan Felipe Herrera’s Akrilica and Harryette Mullen’s S*PeRM**K*T.

DLP: The act of giving birth, giving birth to human life, to a creative body of work, can alter or expand an individual. It’s transformative, visceral, and at times scarring. How has Milk and Filth’s inception, completion, and publication impacted your identity as an individual? As a poet? As a woman?

CGS: This is my feminist barbaric yawp, my Iron John, and as I was writing it, I felt that if I didn’t “go there” the way I wanted, then I was a coward.

DLP: In the final poem in your collection, “When God Was a Woman,” you cultivate a reality where a matriarch occupies a space traditionally viewed as patriarchal. Depicting a woman as God, as a divine creator, is as provocative as it is brilliant. What led to the inception of this re-envisioning of God and origin?

CGS: “When God Was a Woman” is based on a book by the same title written by Merlin Stone that I read in a religious studies course taught by Mira Zussman at San Jose State University. Stone, an art historian, points to archaeological artifacts that allude to prehistoric matriarchal religions, which was an important discovery to me. I had always suspected that the feminine was the truly divine, and this book confirmed it for me. I've written some version of that poem in all of my books, but this was the book that I wanted to most explicitly speak to my eventual feminist précis of the book’s story.

DLP: The poems featured in the first section of your collection, 'Gender Fables,' equate female selfhood with the terrestrial while those featured in 'Small Deaths' navigate the implications of self-actualized identity within a digitized landscape. What are the implications of organic and synthesized environments in the cultivation of self? Of poetic narrative?

CGS: That's a great question, and one that I hadn't really considered until now. I see the first section as folkloric and organic revisions of commonly accepted tropes of female power, like the book's mythos. The second section is a flash-forward to third wave iterations of second wave tropes and more contemporary notions of “reaction.” The final section, which is largely composed of an ekphrastic work on Ana Mendieta, is the next, the speaker's aspiration, the first breath of the next work. The book had a few aphoristic works, which ironically point in two historical directions—Nietzsche would have been really good at Twitter. Ultimately though, that tension of the synthetic and the terrestrial probably emerges as a result of the adaptation of the old with the new.

Carmen Giménez Smith is the author of a memoir, Bring Down the Little Birds (University of Arizona, 2010), three poetry collections—Goodbye, Flicker (University of Massachusetts, 2012), The City She Was (Center for Literary Publishing, 2011) and Odalisque in Pieces (University of Arizona, 2009)—and three poetry chapbooks—Reason's Monsters (Dusie Kollectiv, 2011), Can We Talk Here (Belladonna Books, 2011) and Glitch (Dusie Kollectiv, 2009). She has also co-edited a fiction anthology, My Mother She Killed Me, My Father He Ate Me (Penguin, 2010). She is the recipient of a 2011 American Book Award, the 2011 Juniper Prize for Poetry, and a 2011-2012 fellowship in creative nonfiction from the Howard Foundation.

Dianca London Potts is a first year Fiction student in the M.F.A. program and is currently working on a collection of short stories and first person plural vignettes. Her work has appeared in APIARY Magazine, Philadelphia City Paper, and New Wave Vomit.