What is your favorite National Book Critics Circle finalist of all time? The first NBCC winners, honored in 1975 for books published in 1974, were E.L. Doctorow (Ragtime, fiction), John Ashbery (Self-Portrait in a Convex Mirror, poetry), R.W.B. Lewis for his biography of Edith Wharton, and Paul Fussell (The Great War and Modern Memory, criticism). In 2014 the National Book Critics Circle prepares to celebrate nearly forty years of the best work selected by the critics themselves, and also to launch the new John Leonard award for first book. So we're looking back at the winners and finalists, all archived on our website, and we've asked our members and former honorees to pick a favorite. Here's the twenty-fourth in our latest in six years of NBCC Reads surveys. 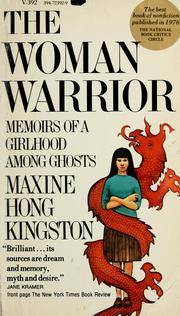 The book that strikes me most perhaps is Maxine Hong Kingston’s “The Woman Warrior: Memoirs of a Girlhood Among Ghosts” from 1975-1976. I first read it, I think, in junior high or high school back in the '80s and loved the lyricism. It blends autobiography with folktales and mythology, something I had seldom seen before then. That Kingston wrote about being a girl in a culture that favored boys, about growing up Chinese American in California, the push and the pull… these were elements I could identify with, though I would not realize it until much later. And though she has since published countless other books, including NBCC finalist “China Men” from 1980-1981, “The Woman Warrior…” remains a favorite. It also helped to instill in me, way back when, this love of literature and appreciation for good storytelling, which I value every day. I will have to dig out my copy and re-read it once again.

Christina Eng is an Oakland-based writer and critic.